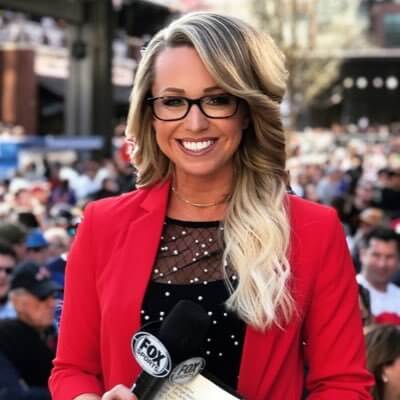 Kelsey Wingert has not been very open regarding her personal life. As such official information on her dating life is not available. However, she has been seen together with insurance expert Jordan Philips on many occasions and they have been romantically linked together for some time now. So for now, we can safely assume that the two are dating at the moment.

Kelsey has not been married in the past and has no children as of yet. Because of her private nature, not much is known about her previous partners or relationships as well.

Who is Kelsey Wingert?

Kelsey Wingert is an American journalist who mainly focuses on sports journalism. He works for Fox Sports South and prior to the current season, covered the Atlanta Braves baseball team as a correspondent field reporter. She is also well known for her studio cut-ins for the NBA and NHL.

Kelsey Wingert was born on the 20th of June, 1992 in Sugar Land, Texas, the U.S. As of July 2020, she is 28 years old. She was born to father Greg Wingert and mother Betsy Wingert and was raised in her hometown of Sugar Land.

Her ethnicity is Caucasian and her nationality is American. Information on her siblings and other family members are not available.

Talking about her educational background, Kelsey attended and graduated from Stephen F. Austin High School. From then on she started playing volleyball. After high school, she attended Louisiana State University for its TV broadcast department. She also played intramural volleyball until her graduation at the University.

Kelsey Wingert had an interest in sports from her childhood. Even though she wasn’t able to pursue a career in sports, she was able to be involved in the field as a sports journalist later in her career. She made her debut as a journalist from Tiger TV, where she covered sporting events and statistics. She worked there for two years.

After Tiger TV, she went on to work as an assistant at KPRC-TV. Her experience at KPRC TV proved to be very valuable as it helped her to land her current job as an anchor for Fox Sports Southeast and Fox Sports South. She used to cover the baseball team Atlanta Braves until the current 2020 season. Aside from that, she is also seen in a lot of studio cut-ins for the NBA and NHL.

or her work as a sports journalist, she is adored by many sports fans throughout the country. She gives comprehensive and unbiased commentary on the events and her likable personality as well as polite demeanor has gained her a lot of fans over the years.

As of 2020, Kelsey has accumulated an estimated net worth of around $1 million. Information on her salary is not available at the moment. For reference, an average journalist makes around $44k annually in America.

Kelsey stands at a height of 5 feet 7 inches and weighs approximately 60 kilograms. She has blonde hair and dark brown eyes. More information on her body measurements has not been made public by her.

Wingert is active on Twitter and Instagram. She is more active on Twitter, where she shares a lot of her opinions and also information on the current political state of the country. Though not as popular as her twitter, her Instagram account is still very popular and has managed to gather a following of over 50k people. And her Twitter has 83.5k people following her.

You may also like to read more about the Bio, Career, Net Worth, Relationships, Social Media, and more about Kimberley Strassel, Nick Kypreos, Maurielle Lue, and more.