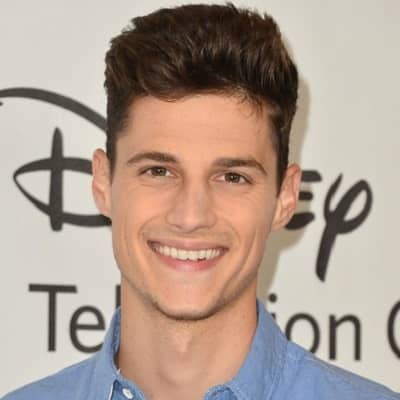 Ken is a married man. He is married to Aviva Baumann. She is also an American actor.

The couple married on 16 July 2012. The marriage ceremony is held among their family and close ones.

The pair is the active members of Giving What We Can who donate at least 10% of their income to effective charities.

They are together for several years but haven’t shared any children.

Who is Ken Baumann?

Ken Baumann is an American publisher, writer, editor, teacher, and book designer. Along with his author career,  is also an actor and has appeared in various Tv shows and movies.

Ken Baumann was diagnosed with Crohn’s disease in 2012.

Ken was born on August 8, 1989, in  Urbana, Illinois, United States. His birth name is He was raised on a small ranch and wildlife rescue in West Texas.

His father’s name is Robert Baumann. Likely, his mother’s name is Vicky Baumann. She is an acting coach and also a talent manager. His family has a miniature horse ranch and wildlife rescue business.

Ken has a younger sister, Demi Baumann, and an older brother named Scott.

He started to act professionally just at the age of 12. Ken is of Italian, and Scotch/Irish ancestry.

Baumann enrolled at St. John’s College in Santa Fe, New Mexico in the year 2014. he graduated with a Bachelor of Arts in 2017.

For about his early ten years Ken worked in theater, film, and television. He is popular as Ben Boykewich in The Secret Life of the American Teenager. similarly, he has also appeared in various other tv shows like The Other Mall, Eli Stone, Castle, and Call Me Crazy: A Five Film.

Ken has more accomplished his career as a writer in the industry. He is the author of various popular novels like Solip, Says, Cut, Map, and The Country.

The author has also written various nonfiction books like EarthBound and Eat the Flowers. As well as he has contributed to various essays, short stories, and poems. He is also a series designer for Boss Fight Books. Moreover, the author has also co-published No Colony, a literary journal, with Blake Butler.

Ken also owns and operates Sator Press which is a 501(c)(3) nonprofit publishing company. He has co-founded the iOS app Sweetspot, and also an angel investor in the learning platform Memrise.

He is also in philanthropy. Kem is a member of Giving What We Can. Kem is also working as a presidential fellow for academic support &writing coordinator at the st. john’s college from 2018.

Being active in the industry for such a long time he must have acquired a good fortune. He owns his own press and also other various platforms. However, his net worth is not revealed and still under review.

Talking about his wife, Aviva Baumann has a net worth of around $2 million.

Ken has always stayed out from various rumors and any sandals in the media. Also, he prefers not to be involved in any controversial activities.

Ken stands with a height of 6 feet and 1 inch. He has a very good-looking appearance with brown colored hair and eyes.

The writer doesn’t seem to have an official account on social media sites. Although he has various fan-made accounts.