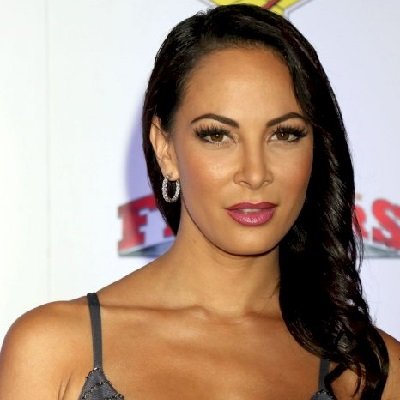 Her husband, Swanson is a Mixed Martial Artist by profession. The couple tied the wedding knot on the 1st of June 2018 in a very intimate manner. Later, Cub announced the news via Twitter posts.

The couple welcomed their first daughter, Royal Rae Swanson on the 21st of August 2017. Later, on the 2nd of September 2018, they had their identical twins’ sons, Saint and King Cub Swanson.

Currently, she resides in Newport Beach, California along with her family.

Who is Kenda Perez?

Kenda Perez is a model, entrepreneur, and TV host. She is renowned as the television host of UFC & Fox Sports.

She is also a co-founder of the beauty line, Perfect CBD Beauty, and blogger.

Kenda Perez was born on the 18th of May 1983 in Laguna Beach, California. Her birth name is Kenda Rae Perez.

Her father, Ken Perez but her mother’s name is not disclosed. She is of Jewish-Spanish ethnicity. Ken is a martial artist and holds a black belt in Shitō-ryū.

Talking about education, she attended Orange Coast College in Orange County where she grew up.

While growing up, Kenda Perez always has an interest in modeling. However, she intended to be a pre-school teacher. However, the future was yet to be unfolded.

Giving the modeling a chance, she entered to Maxim magazine’s Hometown Hotties competition. In the competition, she was voted at the finalist.

After the competition, she started her career as a model. As a model, she has made her appearance in many magazines. Some of the magazines include UFC Magazine, Muscle & Fitness, Inside Fitness, and so on.

Moving forward, she expanded his career as a Television host too. As a host, she debuted with the program, The Best of Pride Fighting Championships produced by UFC. Moving forward, she started hosting programs for the Fox Sports Network.

She has also launched her own beauty line name Perfect CBD Beauty. Skin Care essential oils are the trademarks of the beauty line. As of now, she has is exploring her career as a lifestyle blogger. Most of the contents of her blogs include Food and Beauty.

Apart from that, she also makes through the profit for her beauty line, Perfect CBD Beauty. Also, she earns as a beauty blogging too.

Her partner, Cub Swanson also has an estimated net worth of $1.9 million. As a couple, they have a net worth of around $3 million.

Till the date, she has not been through any sort of controversies and scandal that created a buzz in the media. Similarly, she has managed to remain far from any rumors related to her.

Kenda Perez is a brown-eyed brunette. Her height is 5 feet 7 inches and weighs around 55 kg. Her body measurements are 32-24-34.

Khloe Kardashian welcomes her first child with boyfriend Tristan after her infertility problems!

North West’s fourth birthday bash with her family, their words of love and her fabulous life: Know them here!