Kenley Jansen has a married life.

Kenley Jansen is married to wife Gianni Jansen, who was born in Curacao. They married on December 11, 2016, and their relationship is doing well so far. They were great friends until their friendship turned into a love connection. They announced their engagement after dating for two years. 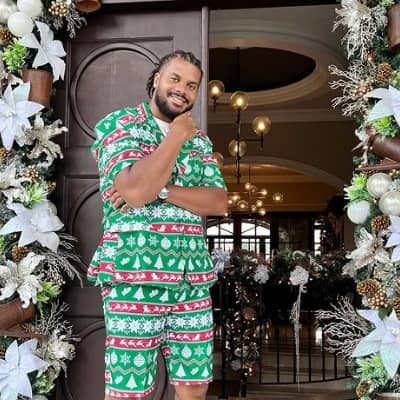 Who is Kenley Jansen?

Kenley Jansen is a Curaçaoan Major League Baseball pitcher who currently plays for the Atlanta Braves. He was also a member of the Los Angeles Dodgers in the past.

He is also a three-time Major League Baseball All-Star and a two-time National League Reliever of the Year in 2016 and 2017.

Kenley Jansen is a baseball pitcher who has become the 30th pitcher in history to earn 300 career saves. His most recent appearance was in 2022 when he signed a one-year contract with the Atlanta Braves. He was also spotted in MLB on Fax from 2019 to 2021.

Kenley Geronimo Jansen, better known as Kenley Jansen, was born on September 30, 1987 in Willemstad, Curacao. He is Curaçaoan in nationality and African-Curaçaoan in ancestry.

His father, Isidor Jansen, worked in construction until he had a stroke when Kenley was 12 years old, and his mother, Bernadette Jansen, was a travel agent.

Jansen was the youngest of three siblings, with two older brothers named Ardley Jansen and Verney Jansen. He spent his youth playing baseball with his siblings since he was six years old.

Kenley began his career as an outfielder before shifting to shortstop. He eventually met Andrelton Simmons and was transferred to third base, and he later played first base and catcher.

Kenley Jansen hasn’t shared his educational history with the media. His information related to his major subject and degree he graduated and the university and school he has attended have not been revealed in the media. he has kept his history about education secret from the people.

Kenley Jansen had played many games in the minor league before being promoted official to Los Angeles Dodgers.

Jansen was promoted to the Dodgers on July 23, 2010, and made his Major League debut in relief on July 24 against the New York Mets.

That year, on August 26, he had his first Major League plate appearance at Miller Park in Milwaukee against Yovani Gallardo of the Brewers, and on August 31, he recorded his first major league hit at Dodger Stadium.

Jansen became an important component of the Dodgers’ bullpen in 2011. Jansen took over as the Dodgers’ closer in May 2012 after Javy Guerra failed in the job.

However, at the end of the season, after missing some time due to heart concerns, Jansen was replaced as closer by Brandon League.

Jansen avoided his first arbitration process by agreeing to a $4.3 million contract with the Dodgers on February 11, 2014. This year, he became only the fourth Dodger pitcher in history to record 40 or more saves in a season.

On January 16, 2015, he avoided arbitration once more by signing a one-year, $7.425 million contract with the Los Angeles Dodgers. On the other hand, on February 17, he had surgery to remove a tumor from a bone in his left foot. He was out of play until May due to his rehabilitation period. Jansen was finally reactivated off the injured list and rejoined the Dodgers’ squad on May 15.

On June 20, 2016, Jansen had his 16 2nd career save against the Washington Nationals, shattering Éric Gagné‘s all-time team record.

He was also named to the National League squad for the 2016 Major League Baseball All-Star Game, his first all-star appearance, and he played in the 2016 NLDS against the Washington Nationals.

He was plagued by an ailment during spring training and was overworked following his 2017 workload, leading to two blown saves during a rough April. He rebounded in May, June, and July, and was named to his third straight all-star game in 2018.

Kenley had a four-out save against the Colorado Rockies at Coors Field in Denver on April 7, 2019. He also made saves against the San Diego Padres on May 3 and 4.

He was late reporting to camp following the pandemic-imposed suspension because he was infected with COVID-19, which hampered his conditioning during the shutdown. Jansen blew his fourth career World Series save in Game 4 of the 2020 World Series against the Tampa Bay Rays, creating a new World Series record.

He became the eighth reliever in MLB history to reach 1,000 strikeouts on August 25, 2021, when he struck out Austin Nola of the San Diego Padres. Jansen pitched in five of the six games of the 2021 NLCS against the Atlanta Braves, allowing two hits and one walk while striking out six and collecting the save in Game 3.

Kenley Jansen agreed to terms with the Atlanta Braves on a one-year, $16 million contract on March 18, 2022.

Some of Kenley Jansen’s awards are:

Kenley Jansen is a well-known baseball pitcher with a net worth of $16 million in 2022. According to the source, his net worth is known, but he has not declared his property, fortune, or other assets to the media. He recently signed a one-year, $16 million contract with the Atlanta Braves.

Kenley Jansen’s departure from the Dodgers made headlines. The Dodgers organization, from Dave Roberts to Clayton Kershaw to Andrew Friedman, all wanted Jansen back. He did, however, wind up signing a one-year contract with the Atlanta Braves.

Jansen was diagnosed with an abnormal heartbeat in 2011, and he lost some time that season while on blood thinners to prevent clots.

The issue returned late in the 2012 season, and he lost significant time while being addressed. Jansen underwent treatment on October 24, 2012, during which Dr. Koonwalee Nademanee found aberrant tissue in his left atrium and cauterized it to prevent it from creating abnormal electrical impulses.

Although his height and weight are stated, his physical measurements such as hips, waist, and chest sizes are not. He normally wears a shoe size 8 in the United Kingdom. On the outside, he appears to have brown eyes and black hair.

Kenley Jansen is a frequent user of social media. He is active on Instagram, where he has 261k followers and 330 posts. On Instagram, he has posted several photographs of himself playing baseball.

Not only he has shared his passion for baseball he has also shared good memorable memories with his loved ones and close ones. Recently, he shared a photograph of himself and with his group.

Kenley, who joined Twitter in July 2013, has around 118.7k followers and 787 tweets. He also has a Facebook account with 76k fans where he posts images of himself playing baseball. He also has an account called The Kenley Jansen Foundation, where he has 1114 admirers and 1077 likes. Despite the fact that his videos may be seen on YouTube, he does not have his own YouTube channel.