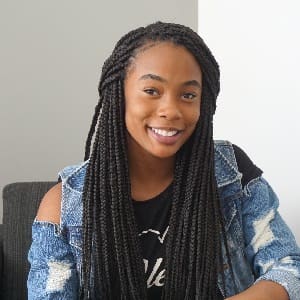 Is Kennedy Holmes Single or dating someone?

Since Kennedy Holmes is just 18 years old, she has not been involved in any serious relationships.

There are no records available about her past and present relationships. At present, she is believed to be single.

Who is Kennedy Holmes?

People mostly know her as one of the youngest performers ever on ‘The Voice’ to advance deep into the competition.

Holmes was born in St. Louis on December 7, 2004. She was born to parents Shawn and Karen Holmes.

According to her mother Karen, Kennedy began singing at the age of two. Additionally, she was also interested in dancing as a child.

She has an older brother named Jordan Bow. She is of American nationality. Furthermore, she is of African-American ethnic background.

Holmes initially made her professional debut as Little Inez in the production of ‘Hairspray.’

She competed in season 15 of NBC’s ‘The Voice.’ In her first performance, she performed Adele’s ‘Turning Tables.’ All of the judges turned around during her performance.

Additionally, she chose Jennifer as her mentor. Furthermore, Kennedy came fourth in the competition.

She performed a cover of the song ‘Confident’ in the live finale.

Apart from her time singing and dancing, she loves playing volleyball.

Holmes has not been linked with any award nominations in her career. Additionally, she has not revealed her current salary.

Furthermore, there are no details available about her estimated net worth at present.

The Voice’s recent result was controversial as always. Holmes came fourth in the competition.

Talking about her body measurement, there are no details available about Holmes’s height and weight.

Her hair color and eye color are black.

Similarly, her Facebook page has more than 21k followers.