Rugby player Kenny Logan appeared in the reality show Strictly Come Dancing. He is married and a father of two. 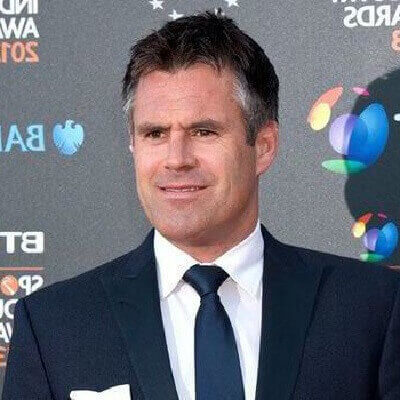 Kenny Logan is a happily married British presenter. His wife’s name is Gabby Lorath. She is also a former international rhythmic gymnast famous for her presenting roles with BBC Sport and ITV.

The couple exchanged wedding vows on July 19, 2001. From their marriage, they have two children, twins Lois Maya, and Reuben McKerrow born on 28 July 2005 after undergoing IVF treatment.

The couple competed together in Strictly Come Dancing and have also done charities work together including the annual mass-participation event called ‘Logan’s Challenge’.

Previously, he was in a relationship with Kirsty Young for three years before breaking up in 1999.

Who is Kenny Logan?

Kenny Logan was born Kenneth McKerrow Logan on 3 April 1972 in Stirling, Scotland. As of 2021, his age is 49. There is no information about Kenny’s parents and siblings. Similarly, he has not revealed much regarding his childhood days.

He loved playing football as a child and played as a goalkeeper. He even had trials for Dundee United and Hearts.

However, he later got interested in rugby making his senior debut at the age of 17 for his hometown club, Stirling County. He spent his childhood days in Stirling and his ethnicity is Scottish.

Kenny went to Wallace High School but he quit school at the age of 16 to play rugby. Thus, he does not have an academic qualification.

Kenny Logan made his Scotland debut in 1992 against Australia at the age of 19. He played professionally for the Glasgow Rugby team in three matches of the 1996–97 Scottish Inter-District Championship in addition to 2 matches in the European Challenge Cup, the European Conference. He was in the starting XV at the 1994 Five Nations Championship for the national team.

After that, he joined the Wasps where he played for seven seasons helping the team win the Anglo-Welsh Cup in 1999 and 2000. Moreover, he was a part of the Wasps team that won the 2002–03 Premiership Final. He represented Scotland in the 2003 World Cup. Over his 13-year international career, he won 70 caps scoring 20 tries in the process.

In 2004, he re-signed for Glasgow. He played there for a season after which he joined London Scottish. He decided to hang his boots in 2005.

Moreover, he is also a past president of the children’s charity, ‘Sparks’. In 2009, he and his wife organized an annual mass-participation event called ‘Logan’s Challenge’.

Logan stands at a height of 6 feet 2 inches and weighs around 94 kg. He has brown hair and a pair of brown eyes.

Kenny Logan has an estimated net worth in the region of $1 million – $5 million as of 2020. He has earned money as a rugby player in the past and as a TV personality. International rugby players, on average, earn more than $60k per year.

Logan has not been involved in any controversies. He has been able to keep himself away from any type of controversy and scandal. So far, he has not done anything controversial in his career. Similarly, there are no rumors about him.

You may also like to read the Bio, Career, Net Worth, Relationships, Social Media, and more about Gabby Logan, David Carrera, Peter Lenkov, and more.

What is Kenny Logan doing now?