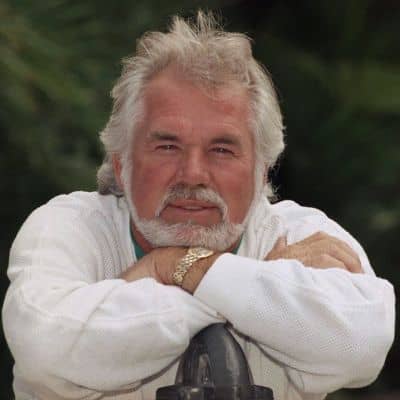 Talking about his love life, Kenny Rogers married 5 times throughout his lifetime.

He was first married to Janice Gordon. The former couple married on 15 May 1958.

Together the couple shared a daughter, Carole Lynne. Later, they separated in April 1960. Afterward, he married Jean in October 1960. Sadly, their relationship did not go well and they decided to separate in 1963.

After a year, Kenny married his third wife, Margo Anderson. They tied the knot in October 1964. The duo shared a son, Kenny Jr. However, they also divorced in 1976.

The singer then married his fourth wife, Marianne Gordon pm 1 October 1977. Sadly, they divorced in the year 1993 with one child.

Lastly, Rogers married Wanda Miller on 1 June 1997. They had welcomed twin sons and were together for 22 years until the singer’s death.

Who is Kenny Rogers?

Kenny Rogers was a well-recognized American singer, songwriter, musician, actor, record producer, and entrepreneur. Rogers was inducted into the Country Music Hall of Fame in 2013 and was mainly popular with country audiences but also mapped more than 420 hit singles across various genres.

Moreover, he sold more than 100 million records worldwide during his whole life which made him one of the best-selling music artists of all time.

Kenny Rogers was born on 21 August 1938. He died at the age of 81 years old. Likewise, his birthplace was Houston, Texas, the USA.

Talking about his nationality, Rogers held an American identity whereas his ethnicity is Native American-Irish.

He passed away at the age of 81 on 20 March 2020 due to natural causes under hospice care at his home in Sandy Springs, Georgia.

Kenny started his music journey in the 1950s and tried a range of musical styles before earning a foothold in the industry. Earlier, he earned some fame for his 1957 hit, That Crazy Feeling before testing with Jazz, country-pop, and psychedelic rock over the next few years.

Later, Rogers became a member of a jazz group named the Bobby Doyle Three. He earned high admiration from the hit, Here’s That Rainy Day. At the end of the 60s, Kenny began serving as a producer, writer, and session musician for other artists. He made a band named, Kenny Rogers and the First Edition.

This band then successfully released a number of hits which include Just Dropped In(To See What Condition My Condition Was In). The track was famously starred during a memorable dream sequence in the movie, The Big Lebowski. His first album as a solo artist was Love Lifted Me.

Additionally, Kenny collaborated with Dottie West on a number of projects like Every Time Two Fools Collide, Anyone Who Isn’t Me Tonight, What Are We Doin’ in Love, All I Ever Need Is You, and Till I Can Make It On My Own.

Moreover, the star personality also became the perennial star of the guest of TV specials and seasonal events over the years such as Kenny Rogers and the First Edition: Rollin’ on the River(1971), A Christmas Special… With Love, Mac Davis(1984), Kenny Rogers Live in Concert(1983), Kenny & Dolly: A Christmas to Remember(1984), Keny Rogers and Dolly Parton Together(1985).

In 2014, he emerged as himself in a GEICO commercial, singing part of his song, The Gambler.

The star singer, Late Kenny had a luxurious and lavish lifestyle. He was engaged in the music industry for more than 60 years and earned high fame, name, money, power, and properties.

It is reported that Kenny Rogers had an estimated net worth of $250 million.

Additionally, he owned an estate in Bel Air that worth $65 million before it was sold for $50 million in the year 2015. Kenny had made a profit of around $1 million from selling his Mediterranean-style estate in Sandy Springs.

Kenny was never part of any controversial matter or rumors. He has maintained his private and professional life properly.

It seems that Kenny had kept a good balance between his private life along his work life.

A prominent singer, Kenny Rogers had handsome looks and an admirable personality. He stood at a height of 5 feet 11 inches. Also, he had a balanced body weight of 82 kg.

Furthermore, Rogers had dark brown eyes whereas his hair was white.

Nevertheless, the star personality had never mentioned other physical details in the public yet.

Regarding his social media presence, Kenny Rogers was an active personality on social media. Kenny had more than 147k followers on his official Instagram account @_kennyrogers.

He was also active on Twitter with around 160.5k followers.

Moreover, Rogers was also available on Facebook with nearly 3.1 million fans and supporters.