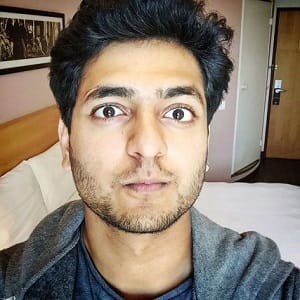 Kenny Sebastian has not revealed much regarding his personal life. There are no records available relating to his past and present relationships. At present, he is believed to be single.

Who is Kenny Sebastian?

Kenny Sebastian is an Indian comedian, musician, and filmmaker. People mostly recognize him for his stand-up bits and short films.

Sebastian was born in India on December 31, 1990, to Pala parents. He spent his childhood years in different parts of India after finally settling in Bangalore. Additionally, he became interested in film-making at an early age. He is of Indian nationality. Furthermore, he belongs to Indian ethnic background.

Talking about his education, Sebastian has a bachelor’s degree in Visual Arts from Chitrakala Parishath. Previously, he also attended Kendriya Vidyalaya NAL.

Sebastian initially began making short films at the age of 15. Since he did not have a camera of his own, he used to borrow one from his friend. By the age of 23, he had already directed 12 short films and 2 feature films. Additionally, Sebastian has also started his personal YouTube channel. He started his self-titled channel on April 14, 2008. Furthermore, his first video was titled ‘9 hours of life’.

Currently, Sebastian’s YouTube channel has over 1M subscribers. He often posts his stand-up bits on the channel. He has revealed that he first did a stage show at the age of 19. In addition, he is the winner of the IIT fest which was held in Mumbai. To date, he has done over 500 shows and has worked with some of the famous names in the world of comedy including Vir Das, Phil Nichol, and Imran Yusuf among others.

Additionally, he also wrote and directed a season of India’s first sketch comedy television show, ‘The Living Room’. All in all, Sebastian has 7 credits as an actor for his performance in shows including ‘Comicstaan’, ‘The Improvisers: Something from Nothing’, ‘Die Trying’, ‘Pushpavalli’ and ‘Star Boyz’. Furthermore, he also has 5 credits as a writer and 3 credits as a producer.

Sebastian has not revealed his current salary. Additionally, there are no details available about his net worth at present.

Some of the jokes that Sebastian has said over the years has received a fair amount of criticisms. However, he has not been part of any notable controversies in his career. Additionally, at present, there are no rumors concerning Sebastian and his career.

Talking about his body measurement, Sebastian has a height of 1.73 m. Additionally, he weighs around 68 kg. Furthermore, his hair color and eye color is black.

Also find out more about Kunal Nayyar, an English-Indian comedian, and actor who grew up in New Delhi.