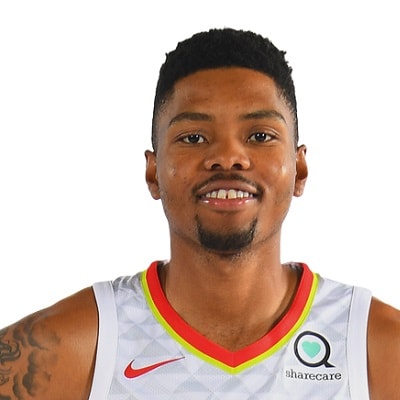 Kent Bazemore is a married person. He has been married to his longtime girlfriend Samantha Serpe since July 9, 2017. His wife is an athlete too and played field hockey while at Villanova University. The couple is blessed with a son Jett Serpe Bazemore, who was born on 20 April 2019.

Who is Kent Bazemore?

He was born on July 1, 1989, in Kelfors, North Carolina, USA. His birth name is Kenneth Lamont Bazemore Jr. and he is currently 29 years old. He was born to father Kenneth Bazemore, Sr. and mother Glynis Bazemore. He has a sibling- a brother named WyKevin Bazemore.

Kent holds American citizenship and his ethnicity is African-American.

He joined Bertie High school and then he attended Old Dominion University from 2008 to 2012 with two college degrees – Human Services and Criminal Justice.

He played for Old Dominion Monarchs basketball team while in Old Dominion Universit. He played in the 2009 CollegeInsider.com Tournament, 2011 NCAA tournament and he averaged 15.4 points, 6.1 rebounds and 3.1 assists per game in his final season at ODU.

He became the CAA Defensive player of the year in 2011, second team All-Conference and was awarded Lefty Driesell Award and in the 2011-12 season. In addition, he was named the CAA preseason player of the year, preseason Mid-Major All-American by collegeinsider.com

His net worth was estimated to be over $90 million which he has accumulated from his professional career.

His $70 million contracts with the Hawks was the biggest ever for an undrafted player.

Kent has been successful in keeping himself far from rumors and controversies in his personal and professional life.

He has a height of 6 ft. 5 inches and weighs 91 kg. Kent has dark brown eyes and black hair. Other information regarding his dress size, shoe size, etc. are not available.