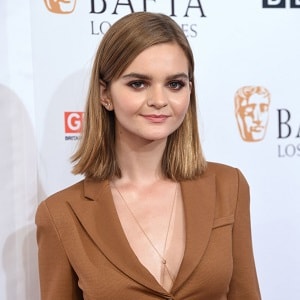 not to sound super pretentious, but that's a big part of what helps me get in character.”

Kerris Dorsey is dating actor Dylan Minnette. The couple is dating from the year 2014. They first met on the set of Alexander and Terrible, Horrible, No good, Very Bad Day. They played the role of siblings to the lead character Alexander Cooper. Since then, they have been dating each other.

Who is Kerris Dorsey?

Kerry Dorsey is an American actress and singer. She is best known for her role as Paige Whedon in the TV series, ‘Brothers & Sisters’. She is also famous for her role as Casey Beane in ‘Moneyball’.

She was born on January 8, 1998, in Los Angeles, California, USA. Her birth name is Kerris Lilla Dorsey and she has a birth sign, Capricorn. Her father’s name is John Dorsey and he is the founder and owner of the hair accessory company ‘Lilla Rose’. Her mother’s name is not available. She was raised in her own hometown and her parents were from middle-class family. Kerris has a sister named Justine Rose Dorsey. She holds American citizenship and her ethnicity is Irish.

She has been homeschooled and she was educated on a film set. She used to visit her teachers once a week.

She debuted her career from American biographical drama film ‘Walk the Line’ in 2005 and she appeared as Kathy Cash in that film. Kerris appeared as Zoe in the American romantic fantasy film ‘Just Like Heaven’ in the same year. She acted in the movie ‘Fuel and Flower Girl’ in 2009.

She became more people after her role of Casey Beane in the American biographical sports drama film ‘Moneyball’. Kerris made her appearance in ‘Girl vs. Monster’ in 2012. She acted along Steve Carell in the American family comedy film ‘Alaxender and the Terrible, Horrible, No Good, Very Bad Day’.

Kerris made her debut in her television appearances from 2006 TV show ‘Scrubs’. She appeared in TVs including Monk, So Notorious and Vanished in late 2006.

She was nominated for Young Artist Awards in the category ‘Best Performance in a Feature Film-Young Ensemble Cast’ for the movie ‘Alexander and the Terrible, Horrible, No Good, Very Bad Day’ in 2015.

Kerris Dorsey: Net Worth and Salary

She has a net worth of around $4 million and her main source of income is from her professional career. Her salary is under review.

There were rumors of their on and off relationship during her initial phase of her affair with Dylan Minnette. But now, they are stronger and living their dating life happily.