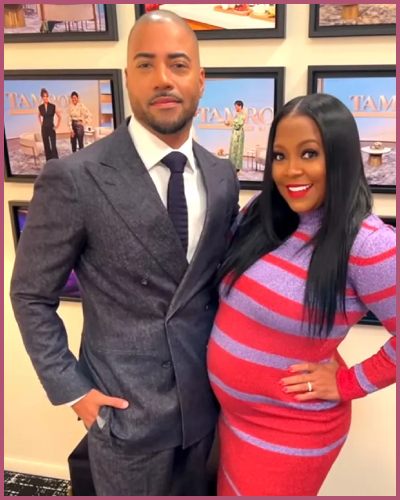 Baby is on the way!

Keshia Knight and her husband Brad James are expanding their family member. On Thursday, December 1, the Cosby Show alum, 43, took to Instagram to announce the exciting news that she and Brad are expecting their first child together.

She shared a boomerang featuring a photo of herself flaunting her baby bump in a purple and red fitted sweater dress standing beside her husband Brad James, who looked dapper in a formal outfit.

Well, Pulliam might be expecting a baby boy because she hinted in the caption section that Junior James is coming.

The 43-years old actress is already a proud mother to 5-years old daughter named Ella, whom she shared with ex-partner Edgerton Hartwell.

Similarly, Keshia and Brad recently made an appearance on the Tamron Hall Show where the couple might be given more updates on their pregnancy.

The beautiful couple began dating in 2019 after they met on the set of the TV movie Pride and Prejudice: Atlanta. After dating almost for two years, they announced their marriage in September 2021 sharing photos from the intimate event on their respective social media accounts.

Congratulations are in order to Keshia Knight Pulliam and Edgerton Hartwell for their forthcoming baby and best wishes for their parenting journey.

Brad and Keshia decided to expand their family last year but they have to put it on hold due to the COVID-19 pandemic. The former Cosby Show star shares her experience in Eggs Over Easy: Black Women & Fertility, an OWN documentary that aired on Discovery+.

The Atlanta-based actress was set to begin the egg-freezing process when “elective” medical procedures were halted when the country went into lockdown.

“I was 41 at the time and knew that I wanted another kid, but I knew that it wasn’t right now. I began the process of freezing my eggs and then literally the day that I was supposed to start my meds is when, as a result of the pandemic, they shut down all elective medical procedures.”

“So, I was unable to continue.”

Keshia Knight Pulliam is an American actress and producer and she is best known for her childhood role as Rudy Huxtable on the sitcom ‘The Cosby Show’ from 1984 to 1992.