Kevin Bacon is an actor and musician who was seen in the film Footloose. 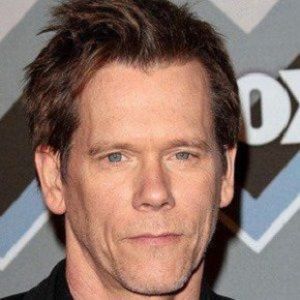 I'll be honest with you. My kids don't watch my movies and never have. I can maybe name a film one hand that they've seen, actually, all the way through

I think we all have a lot of darkness in our bellies. As an actor, the challenge of tapping into that, reaching down into that sadness or anger, is very therapeutic

I'm obsessed with zombies. I like watching zombie movies and I read zombie books.

They are blessed with two children named Sosie and Travis Bacon.

Who is Kevin Bacon?

Kevin Bacon is an actor and musician who hails from America.

He gained a lot of popularity and fame for the musical-drama film Footloose, the controversial historical legal thriller named JFK, the legal drama named A Few Good Men, the historical docudrama named Apollo 13, and the mystery drama named Mystic River.

Moreover, he is also popular in TV series such as The Following and Taking Chance.

He is of American Nationality but, his ethnicity is Caucasian. His father Edmund Norwood Bacon was a respected architect and a prominent Philadelphian and his mother, Ruth Hilda, an elementary school teacher, and a liberal activist. Unfortunately, both of them have already passed away. He spent his early life and childhood along with his five elder siblings.

Talking about his education and qualification, he completed his earlier education at Pennsylvania Governor’s School for the Arts. Later on, he enrolled in the Square Theater School in New York to pursue an acting career.

Kevin Bacon started his career by making a professional theater debut immediately after graduating from the Square Theater School. His talents and abilities landed him the role in the film named Animal House.

Unfortunately, for a few years, he experienced downtime in his career for a few years. However, his hard work and patience made him make a name in the New York theater. He appeared in the play named Forty Deuce for which he was given the Obie Award.

Later on, his most awaited break came when he appeared in the film named Diner released in the year of 1982. Furthermore, his fame took the next level, when he starred in the movie named “Footloose making him a household name.

He started appearing in lots of successful movies such as Planes, Trains, and Automobiles, The Big Picture, JFK, The River Wild, Murder in the First, Apollo 13, Hollow Man, Mystic River, Frost/Nixon, and X-Men: First Class and much more. Also, he has appeared in popular TV series such as The Following and Taking Chance.

From his successful career, he has earned a Golden Globe, won Screen Actors Guild Awards thrice, and was nominated for an Emmy. Also, he earned a star on the Hollywood Walk of Fame in 2003.

As a result of his successful career as a talented actor, he amassed a lot of fortune and fame. As of now, his net worth is estimated to be $45 Million but his salary is unknown.

Kevin was in the headline news along with his husband Kyra Sedgwick when they became the victims of Bernie Madoff’s infamous Ponzi scheme. There were rumors that there were complications arising in their relationship because of it. However, the rumor was proven false as they were determined to not let this impact on their marriage.

Recently, the news has arisen that he and his wife are related to each other i.e. cousins. Surprisingly, Kyra responded saying that she was not surprised by the fact.

Kevin Bacon has a well-maintained body structure. He stands at a tall height of 5 feet and 10 inches (1.78m) and weighs 76 kg. Furthermore, he has light brown hair color and blue eyes.