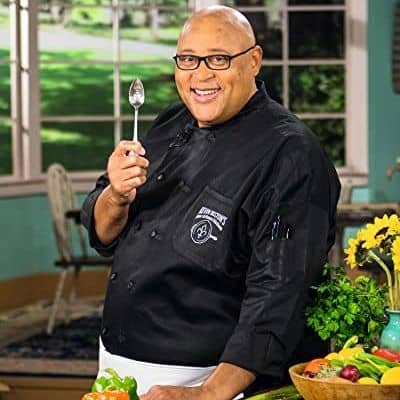 Who is the wife of Kevin Belton?

When it comes to his love life, Kevin Belton is a married man. He has a beautiful wife named, Monica Belton.

There is no info available on their wedding date and other related details.

Together, they are blessed with two children named, Kevin Belton Jr. and Jonathon Belton.

Adding more, he also has a grandson named Cameron Belton who was born to his son, Kevin Belton Jr., and his wife.

Who is Kevin Belton?

Kevin Belton is an American TV host and Chef. He is best known for being the host of his cooking show, ‘New Orleans Cooking with Kevin Belton‘ which aired on WYES-TV.

He has been serving as the instructor at the New Orleans School of Cooking for over 30 years and has taught more than 7000 lessons in his period.

How old is Kevin Belton?

Kevin was born in 1960, in New Orleans, the United States. As of 2023, he is 62 years old holding an American nationality. His ethnicity is Afro-American while his birth zodiac sign is unknown.

His father is of English, American, and French ancestry while his mother is descended from French-Caribbean. So, he has mixed (American, African, French, and English) ethnicity.

Kevin’s mother was a schoolteacher while her father’s profession is unknown.

Furthermore, he has not shared the details regarding his educational life and the institution he pursued his education.

In the beginning, Kevin initiated his career by serving as an instructor at the New Orleans School of Cooking. Prior to that, he used to be a sportsman but due to a severe injury, he could not continue his sports career.

Afterward, he appeared as a co-host in the BBC series, ‘Big Kevin, Little Kevin‘ alongside the British celebrity chef Kevin Woodford.

He then came out as the chef for the WWL’smoring show, ‘Today’s Special‘ segments’ in 2014.

Following that in 2016, he launched his cooking show, New Orleans Cooking with Kevin Belton‘ on WYES-TV. The show became his major breakthrough which earned him immense fame and recognition.

Subsequently, In 2018, he launched his second national television program, Kevin Belton’s New Orleans Kitchen. In the series, Kevin Belton shares the food recipes of local traditional dishes and the old recipe of his mother and grandmother.

His show, Kevin Belton’s New Orleans Celebrations debuted on PBS in April 2019 and even it published its cookbook.

Currently, he is the Morning News Chef for WWL-TV, where he represents the station about local food culture. In 2021, he even hosted,  “Cookin’ Louisiana” on WYES, a Louisiana public television station.
Awards
In 2018, he was given the title of Culinary Legend by the American Culinary Federation.
In 2019, the Lousiana Association of Broadcasters awarded Kevin the ‘Best Social Media award. Even his show received PBS show, received the “Uniquely Louisiana Award” by the association.

What is Kevin Belton’s net worth?

The American chef, Kevin Belton is living a lavish lifestyle. Belton has an estimated net worth of around $6 million.

This is the outcome of his career as a chef and a reality star.

Owing to his tv and cooking career, Kevin Belton has not been involved in any serious rumors and controversies. So, he is able to maintain a clean profile up to date.

The New Orleans Cooking with Kevin Belton host, Kevin stands at the height of 6 feet 9 inches. His exact weight and other body measurements like chest, waist, and hips size are not available at present.

Furthermore, he has a brown complexion, along with a pair of black eyes and hair of the same color. However, he is bald at the moment.

Talking about his social media presence, he is quite active on it. Kevin Belton has an Instagram account under the username, @chefkevinbelton which has more than 21.1k followers.

On the other hand, he also owns a Twitter account which is enriched with over 5.8K followers.

In addition, there is also an official Facebook page under his name, which has garnered around 4.9k friends.