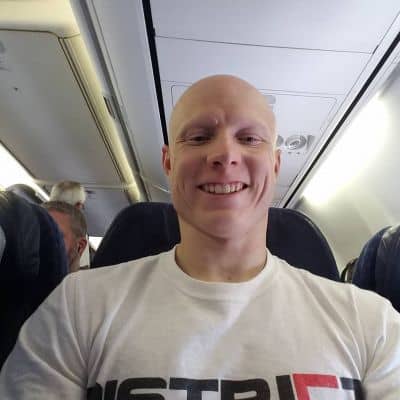 Talking about his relationship details, Kevin Bull is presently single and he is not dating anyone at the moment. He might be focused on his job right now.

Moreover, Bull has not shared any details regarding his relationship information or affair news with the public. It seems he prefers keeping his personal and relationship details away from the media and the public.

Who is Kevin Bull?

Moreover, he was named to the Prestigious Team USA to compete against international opponents.

Kevin Bull was born on 23 July 1985. At present, his age is 36 years old. Likewise, his birthplace is Santa Cruz, California, the USA.

Kevin has not shared his father and mother’s details. Moreover, he has not provided his sibling’s information. His dad is an economics professor.

Talking about his nationality, Bull holds an American identity whereas his ethnicity is European.

Regarding education, the sportsperson earned the Scholar-Athlete of the year award for the CCAA for both these achievements and his 3.92 GPA.

Bull began his work in track and field events during his high school and college days. He ended his academic career as an All-American and California State Champion in the decathlon, pole vault, and he 4*400( Division 2) at CSU Stanislaus.

In 2006-07, Bull earned the Scholar-Athlete of the year award for the CCAA. His start in American Ninja Warrior was fast-paced and high risk as he had left all of his previous jobs to prepare for the show 6 months before featuring and was not selected through the normal casting process. Surprisingly, Bull camped out in front of the course for 4 days for an attempt to run, surprising the crowd with a fast qualifier run followed by the first finals.

Additionally, it now led to the famous Cannon-Ball alley back-flip which spawned changes to safety guidelines and resulted in his name to trend #1 on Twitter for several hours. Bull also showed an aptitude for interviewing an improvisation which enticed both the Ninja Warrior brand and different others to use him as a brand ambassador such as Jeep and the DEFY/ SkyZone trampoline parks.

The star athlete, Kevin has a background in fencing, archery, wrestling, shooting, parkour, climbing, and many other sports. He is best renowned for his forceful approach to obstacles on the NBC show American Ninja Warrior

A well-renowned personality, Bull has earned a handsome amount of money from his profession. He lives a lavish lifestyle along with his family.

It is reported that Kevin Bull has an estimated net worth of $500k-$1 million. He has also featured in a Jeep Commercial in 2018.

Also, he holds an endorsement deal with CircusTrix, the largest Trampoline Park Company in the world and builder of “American Ninja Warrior”

Kevin has never been part of any controversial matter or rumors till now. The reality star has been preoccupied with her professional and private life.

It seems that Bull prefers enjoying his personal life and does not want to merge it with his professional life.

36 years old star, Kevin has a muscular body and an admirable personality. He stands at a height of 5feet 9inches. Also, he has a balanced body weight of 70 kg.

Furthermore, Bull has green eyes whereas his hair is bald.

Regarding his social media presence, Kevin Bull is an active personality on social media. Kevin has more than 55k followers on his official Instagram account @kevin_the_bull.

He is also active on Twitter with around 15.1k followers.

Moreover, Bull is also available on Facebook with nearly 16k fans and supporters.