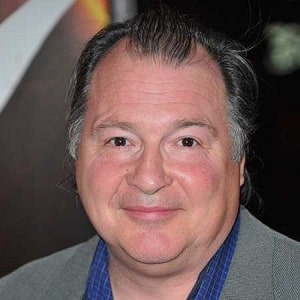 You read the stories about horses being starved at Santa Anita, but a horse can't starve at Santa Anita! I mean, there's just bags of carrots all over the place

food is everywhere. They don't starve any horses!

On a film, they'll always say there's going to be a rehearsal period, and there never is.

Kevin Dunn married Katina Alexander on 19 July 1986 and they have welcomed one child, Jack Dunn. He has not revealed further information about his previous relationship details.

Who is Kevin Dunn?

Kevin Dunn is an American actor and he is best known for his roles as Alan Reed in ‘Dave’, Hicks in ‘Godzilla’ Stuart in ‘Small Soldiers’, Ron in ‘Transformers’ and many more. Recently, he was seen as a pessimistic Presidental chief of Staff Ben Cafferty in Veep.

He has a sister named Nora Dunn, who is an actress. He was born and raised in a Catholic family and he belongs to Irish, English, Scottish and German ancestry.

He was graduated from Illinois Western University in 1977 and he received an honorary doctorate in 2008 from the same school.

Moreover, when he was in his high school, he took part in various activities like plays and theatre. Later, he learned theatre in Chicago.

He made his appearance in many live theatre performances in Chicago and suburbs. He worked in theatre companies Northlight, Remains, Wisdom Bridge and Goodman before he made his way towards TV and motion picture career.

Kevin worked in a series named ‘Samantha Who?’ which is a series appearing on ABC from 2007 to 2009. He played as Ron Witwicky in Michael Bay’s ‘Transformers’ film series. He made his film appearance in ‘Small Soldiers’, ‘Stir of Echoes’, ‘Godzilla, ‘Snake Eyes’, ‘Mad Love’, ‘Ghostbusters II’, ‘Dave’, ‘Hot Shots!’, etc.

He portrayed the role of President Richard Nixon in ‘White House Counsel’, Charles Colson in ‘Nixon’, and as Sandy Berger in ‘The path to 9/11’. He played as Bette Midler’s husband in ‘Bette’ in the show’s first 11 episodes in 2000.

Kevin made his appearance as Joel Horneck in the ‘Seinfeld’ episode ‘Male Unbonding’ and he was featured in ‘Live Free or Die’ as well as the 2006 Sony picture film ‘gridiron Gang’. He is also the executive producer of the documentary film ‘Kumpania: Flamenco Los Angeles’ in 2011.

He has been awarded Screen Actors Guild Awards for the category ‘Outstanding Performance by an Ensemble in a Comedy Series’ for the movie ‘Veep’ in 2018, and for the same award and category, he was nominated in 2014, 2014, 2015 and 2017.

Kevin Dunn: Net Worth and Salary

It is predicted that he has around $4 million net worth and his main source of income is from his professional career.

He is very secretive about his personal information. He likes to keep his lips tight. Hence, he has not been involved in rumors and controversies in his professional and personal life.

He has a height of 5 ft. 10 inches and he weighs 84 kg. He has black and white hair and black eyes. Other information regarding his dress size, shoe size, etc. are not available.