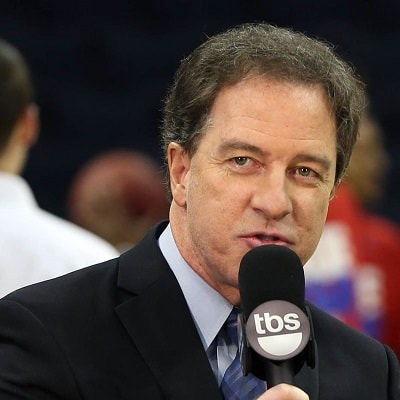 Kevin Harlan is a married person. He has been married to Ann Harlan since 1987. The couple is blessed with four children: Haley Harlan Mancuso, Abigail Harlan, Rob, and Olivia Harlan.

Their daughter, Olivia Harlan exchanged the wedding vows on 14th July 2018 with Sam Dekker, a basketball player for the Washington Wizards of the National Basketball Association.

Who is Kevin Harlan?

Kevin Harlan is an American television and radio sports announcer who is best recognized for serving in the position of a broadcaster for National Football League (NFL), National Basketball Association and NCCA basketball games.

He was born on June 21, 1960, in Milwaukee, Wisconsin. Kevin was born to father, Bob Harlan, who is known for being a former Green Bay Packers executive, and mother, Madeline Harlan. He spent his childhood in Green Bay, Wisconsin, where he was raised alongside two siblings: Bryan Harlan and Linda Harlan.

Kevin holds American citizenship but his ethnicity is unknown.

He attended Our Lady of Premontre High School and became interested in broadcasting. The, he started working for WGBP, a high school radio station, calling play-by-play for various teams – basketball, ice hockey, and football. After that, he attended the University of Kansas’ School of Journalism and Mass Communications, from which he graduated with a BA degree in Broadcast Journalism in 1982.

He began his career in 1982 and became the TV and radio voice of the NBA Kansas City Kings. From his college life, he showed interest in anchoring and also worked as the announcer of basketball during his post-graduate program.

He worked for ESPN from 1992 to 1993 and then joined FOX channel in 1994. Also, he became the announcer of the NFL from 1994 to 1997. He covered NBA playoff games and also served as an announcer for Turner Sports. Eventually, he joined CBS in 1998 and worked there as a play-by-play announcer.

Moreover, Kevin Harlan was hired as a basketball announcer for the Goodwill Games in the same year. He covered several Bowl games, Green Bay Packers pre-season games on WBBM-TV, the Chicago Bears, Jacksonville Jaguars, and many more.

In 2009, he began working as the lead play-by-play announcer for “Monday Night Football” for the Westwood One Radio, covering Super Bowl XLV.

Apart from journalism career, he has been providing his voice in the NBA’s “2K” video games series since 2006. He gave his voice the video game “NFL QB Club 2002” for Acclaim Sports.

It seems Kevin has not been awarded and nominated for his work till date.

He has an estimated net worth of around $1 million and he has earned that sum of money from his professional career. Also, he earns around $400k per year as a salary.

Kevin has been successful in keeping himself far from rumors and controversies in his personal and professional life.

Kevin Harlan has a height of 6 ft. 3 inches and has dark brown eyes and dark brown hair. But, his shoe size, dress size, weight, etc. are not available.