Kevin James is an Actor & Comedian. Kevin is married to his wife and has four children. 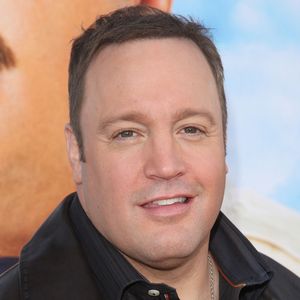 Thanksgiving, man. Not a good day to be my pants.

There's no better feeling in the world than a warm pizza box on your lap.

Just me onstage with a mike having an intimate relationship with the audience. I don't get nervous for that. I just get excited.

Talking about his personal life, he is married to actress Steffiana De La Cruz since their marriage on 19 June 2004 after knowing each other for a long time. They are blessed with four children, namely, Sienna-Marie, Shea Joelle, Kannon Valentine, and Sistine Sabella.

Astoundingly, the couple held each other for 13 years and still going strong. They are an inspiration to lots of young love birds all around the world.

Their relationship is a true example of unconditional true love which is so hard to find these days.

Moreover, he seems to be a very loyal and dedicated person as there are no affairs, rumors, and controversy regarding his personal life. Apparently, he has a very good relationship with his family and is going very strong to date.

Who is Kevin James?

Kevin James is an actor, comedian, screenwriter, voice actor, and producer who hails from America. He gained a lot of popularity and recognition playing the role of Doug Heffernan on the CBS sitcom The King of Queens.

Expressing about his early life, Matthew was born to Janet with her husband Joseph Valentine Knipfing Jr. on April 26, 1965, in Mineola, New York, the U.S. Currently, he is 56 years old. His mother was a worker in a chiropractor’s office and his father was an insurance agent.

He is the descendant of German ancestors. He spent his childhood in a decent situation along with one brother, Gary Joseph Knipfing and a sister Leslie Knipfing.

Kevin started his career as a fullback on the football team. Afterward, he realized that this field was not for him and made a life-changing decision to move towards acting.

As a result, he started out as a stand-up comedian. Astoundingly, after displaying series of stand-up comedies, he landed his first TV job as a presenter and host for the show, “New Candid Camera” in 1991.

In addition, his career took off to the next level after meeting his friend and fellow comedian Ray Romano, who had recently got recognition for Star Search (1983).

Similarly, he made a recurring appearance on the TV sitcom “Everybody Loves Raymond” which was a great hit. It was such a hit that he landed a role on its spin-off of his own, “King of Queens” running from 1997 till the show ended in 2007.

Moreover, he landed his role on his first Hollywood romantic comedy movie  “Hitch” in 2005. Later on, he got his major break in the movie,“I Now Pronounce You Chuck & Larry” in 2007. Two years later, he starred in Adam Sandler’s production, “Paul Blart: Mall Cop.”

As a result of his successful career as a successful actor, he amassed a lot of fame and wealth. As of now, he is worth $100 million.

Recently, a rumor surfaced in July of 2017 associated with him regarding his relationship. The rumor was that he and his partner broke up as he was seen all alone picking up his mail on the afternoon of July 6, 2017. However, the rumor is still a rumor till today as he is still together with his partner.

He appears as a cute person with an average body structure. Currently, he stands at a decent height of 5 feet 8 inches (1.69m) and a weight of 95 kg matching his body.

His eye color is brown and his hair color is dark brown. He has always struggled to be in shape as he is 33% fat in his body.