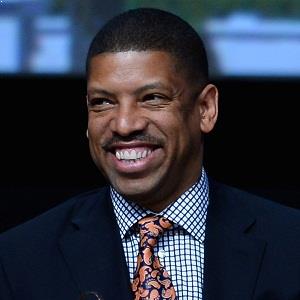 My role model was my grandfather. He instilled in me the feeling that no matter how successful you are you have a responsibility to help others

You realize you can't change the world but it shouldn't stop you from trying.

What is the relationship of Kevin Johnson?

Talking about the relationship status of Kevin Johnson, he is married to educator Michelle Rhee who is a former Chancellor of the District of Columbia School System.

The couple got into a married relationship on 3 September 2011 after dating for several years. Originally they had planned to get married earlier but decided to postpone it due to large media attention to their nuptials.

There isn’t any record of a child born in their married relationship.

Who is Kevin Johnson?

Kevin Johnson is a well-known American retired professional basketball player. He is also best known as the politician who served as mayor of Sacramento, California.

Kevin Johnson was born in Sacramento, California. He was born on 4 March 1966. He is of African American ethnicity and has an American nationality.

He is the son of Georgia West(mother) and Lawrence Johnson(father).

His birth name is Kevin Maurice Johnson. He has a sister named Hillary Johnson and a brother named Ronnie West. After his father died in a boat accident, he was raised by his grandparents.

He studied at Sacramento High School and attended the University of California with a scholarship to play basketball.

Reflecting on the career journey of Kevin Johnson, he started playing basketball professionally after being selected by Cleveland Cavaliers in the 1987 NBA draft. After playing some games for the team he was traded to Phoenix Suns on 28 February 1988.

Quickly adjusting to a new environment and improving their skills he was named the NBA Rookie of the Month in April 1988. In 1994, he was selected to play with the United States national team in the 1994 FIBA World Championship.

While he was in NBA, he founded a nonprofit development corporation St. Hope (Helping Others Pursue Excellence) as an afterschool program for kids in California.

He was elected as mayor of Sacramento, California in 2008 and again reelected in 2012. He became the first African-American to serve in that office.

Kevin Johnson: Salary and Net Worth

He suffered a controversy of sexual assault and harassment of a sixteen years old girl in his home.


Kevin has a height of 6 feet 1 inches and weighs 86 kg. His hair color is black and his eye color is also black. His shoe size is unknown.