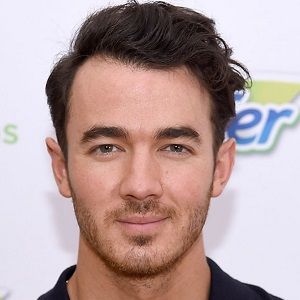 Treasure every single moment you spend with someone you care about.

My secret is I cannot go to bed, I cannot sleep if my bed is not made before I go to bed. I can leave it unmade in the morning, but I have to remake it before I get into it to sleep.

When you marry someone, you marry their entire family.

Throwing water balloons wakes you up!

You wouldn’t know it by looking, but I had no teeth in first grade.

What is the relationship of Kevin Jonas?

Kevin Jonas was dating American actress Zoe. They met on the set of the Jonas Brothers music video “The Year 3000” when they bother were filming for it in May 2006. They both dated for a year and separated in early 2007.

Presently, he is married to Danielle Deleasa, a former hairdresser. They met in the summer of 2007 when he was on a vacation to the Bahamas and started dating.

Their relationship turns stronger when they engaged in July 2009 and married at Oheka Castle on December 19, 2009.

Who is Kevin Jonas?

Kevin Jonas is one of the popular American musician, singer, songwriter, actors, contractor, and entrepreneurs.

He is best known for singing and being a member of the pop-rock band Jonas Brothers, which he formed with his younger brothers, Joe and Nick.

Moreover, he also appeared in the 2008 American concert film Hannah Montana & Miley Cyrus: Best of Both Worlds Concert as himself.

The band Jonas Brothers worked on their debut album It’s About Time released it on August 8, 2006, under the Columbia records. The notable singles from the album are “Mandy” and “Year 3000”.

His father Paul Kevin Jonas Sr is a Musician and former ordained minister at an Assemblies of God church. Likely, his mother’s name is  Denise Marie who is a former sign language teacher and singer.

His nationality is American and his ethnicity is Mixed (German, English, Scottish, Irish, Italian/Sicilian, French-Canadian).

He attended Eastern Christian High School in New Jersey, USA. But, he was home-schooled (just like his other brothers) after his sophomore year of high school.

Kevin Jonas and his brothers signed a contract with Daylight/Columbia Records and formally commenced their musical career.

They work together and in the year 206, their debut album, Its About Time was released. The album has only a limited release of 50,000 copies.

Besides singing, Kevin has a knack for acting as well. Elaborating on his acting career, he debuted along with his siblings in an episode of Hannah Montana in 2007.

To add up, he appeared in movies such as the Disney Channel’s Original Movie, Camp Rock, Disney Channel Series, and Jonas, MTV’s fourth episode of When I Was 17. He currently appeared in an E! reality series along with his wife Danielle and brothers.

The Disney star, Kevin Jonas recently got back together with his brothers Nick Jonas and Joe Jonas for a restart of their band Jonas Brothers. The brothers reunited in February 2019, with a new single, Sucker, after six years of disbanding.

Besides all of these, in the year 2013 after parting ways with the Jonas Brothers, he founded the real estate development, and construction company called Jonas Werner.

Moreover, he is also the co-CEO of The Blu Market company, which deals with communications and plans for social media influencers.

In 2015, he created a food app Yood. He has also built hands for the partnership with the video-sharing app We Heart It just in 2016.

The actor has performed in various good movies and it is commercially so good. He also performs in various TV shows and so he must have good earnings. His net worth is $40 million.

There were different rumors spread about the brother’s reunion and they are planning for a new album together.

In April 2006, Malese Jow and Kevin Jonas were rumored to be dating each other. She was spotted at his concerts multiple times in 2006.

He has dark brown colored curly hair and hazel colored eyes. His shoe size is around 9 (US).

What happened to Kevin Jonas?