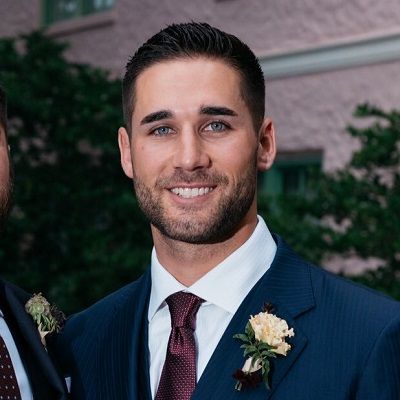 Kevin Kiermaier is a married man as he married his girlfriend Marisa Moralobo. Kevin proposed his wife Marisa for marriage on 11th February 2017. They dated for about a year before getting married.

The couple walked down the aisle on 10th November 2017. It was a lavish wedding ceremony held in St. Petersburg in front of family and friends.

When the two got engaged he made it public by posting a picture with a beautiful caption. Marisa is an athlete who played collegiate volleyball at Warner University, Florida.

In November 2018, the couple welcomed their first child James Kiermaier. The couple is living a happy married life and there is no news of the divorce.

“Who is Kevin Kiermaier?

Kevin James Kiermaier known as Kevin Kiermaier is an American professional baseball center fielder. He plays for the Tampa Bay Rays of Major League Baseball (MLB). Similarly, he is the winner of consecutive Rawlings Gold Glove Awards for center fielders in the year 2015 and 2016.

Kevin was born on 22nd April 1990 in Fort Wayne, Indiana. He was born to mother Chris Kiermaier and father Jim Kiermaier. Similarly, he has two brothers Steve Kiermaier and Dan Kiermaier. His brother Dan is a groundskeeper for the Chicago Cubs. Born in Indiana, Kevin belongs to American nationality.

Now talking about his education, he attended Bishop Luers High School where he played for his high school baseball team. Likewise, he enrolled at Parkland College and played there.

When he was in Bishop Luers High School he played for the school’s baseball team. Kevin was selected in the Tampa Bay Rays in the 31st round of the 2010 Major League Baseball (MLB) draft. He was considered as the top defensive outfielder in their organization including the major league club and all their minor league affiliates.

On 30th September 2013, the Tampa Bay Rays activated him to both the 40- and 25-man rosters for the first time. In the evening’s wild card tie-breaker game, he made his major league debut. In the 2013 American League Wild Card Game he played for two innings against the Cleveland Indians.

On 18th May 2014, he hit his first major league home run against Mike Morin of the Los Angeles Angels of Anaheim. Similarly, on 29th August 2015, he played a game at Tropicana Field against the Kansas City Royals. He finished the 2015 season leading all major league fielders in Defensive Runs Saved with 42.

He began the 2016 season by decreasing his strikeout rate, nearly doubling his walk rate and increasing his power. Likewise, he finished the season hitting .246 with 12 home runs. He signed a 6-year extension contract with the Rays worth $53.5 million in 2017 season.

Furthermore, in 2019 he had the best jump of all major league outfielders.

When he was in high school his school won a state championship in Indiana, and a National Junior College Athletic Association (NJCAA) national championship at Parkland College. He won his first each of the Fielding Bible Award for MLB center fielders and American League Platinum Glove Award.

Similarly, he has won Rawlings Gold Glove Awards for center fielders two times in the year 2015 and 2016.

On 9th June 2017, he suffered a hairline fracture in his right hip after sliding into first base in a previous game. So he was ruled out for at least two months. Again on 15th April 2018, he injured his thumb on the right hand while sliding to second base and left the game.

On April 16, his MRI report revealed that his right thumb had a torn ligament. It ruled him out for 3 months.

Kevin called out teammates after another loss

Kevin knows that his team Tampa Bay Rays cannot afford to lose. On August Tampa lost to the lowly Seattle Mariners after which he called out his team. That defeat was the second in a row for the Rays and their fourth in the last six games.

Tampa now holds just a half-game lead over the Oakland Athletics for the second and final AL wild-card spot.

Kevin has a height of 6 feet 1 inch and he weighs around 91 kg. He has black color hair and grey color eyes.

You may also read the age, parents, career, net worth, and social media of Dale Murphy, Vladimir Guerrero, and Tom Glavine