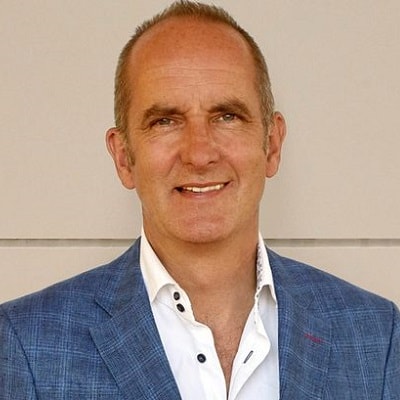 I cannot look at modern buildings without thinking of historical ones.

Your home should be about enriching the daily experience.

Kevin McCloud is a married person. He has been married to Suzanna McCloud, nicknamed Zani. The couple has welcomed four children including son Hugo McCloud. Hugo graduated from the School of Architecture with a Masters of Architecture in 2013. The family lives in Frome, Somerset.

Who is Kevin McCloud?

He was born on 8 May 1959 in Bedfordshire, England. His father’s name is Donald McCloud who worked as a rocket scientist and his mother has already died. He has two brothers named Terence and Graham McCloud.

Kevin holds British citizenship but his ethnicity is unknown.

He joined Dunstable Grammar School and then attended Corpus Christi College, Cambridge where he studied the history of art and architecture. Also, he was a member of Cambridge University Footlights Dramatic Club.

He trained as a theatre designer, working with different productions after graduation. After that, he set up his own lighting design practice and his own business McCloud Lighting.

In early 2007, he opened HAB (Happiness, Architecture, Beauty) Housing Limited in Swindon, Wiltshire in 2007. HAB and housing group GreenSquare, collectively called HAB Oakus had been granted planning permission for its first housing scheme in Swindon in October 2009. In late 2011, The construction of the 42- home scheme, called The Triangle.

Kevin McCloud has debuted his TV performance in ‘Homefront’ on BBC Two as a guest presenter. Moreover, he wrote and presented the shows ‘Grand Designs Indoors’ and ‘Grand Designs Abroad’ and has been presenting ‘The Grand Designs’ since April 1999.

He has an estimated net worth of around $2.85 million and he has earned that sum of money from his professional career.

Kevin has been successful in keeping himself far from rumors and controversies in his personal and professional life.

Kevin McCloud has a height of 6 ft. 2 inches and has blue eyes and light brown hair. But, other information about his weight, shoe size, dress size, etc. are unknown.