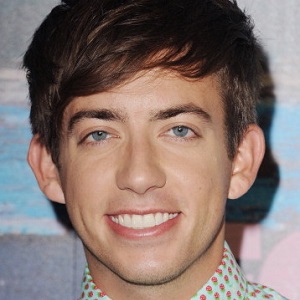 I have a sweet tooth problem. On tour, in catering, the dessert was always so good. When we started the tour I was in the best shape of my life, but by the end of it I was horrible

I am up for anything, but my favorite show in the whole world is this English series, 'Skins.' It would be awesome to be able to go on that somehow

I sang before I acted, but I always wanted to do them simultaneously.

What is the relationship of Kevin McHale?

Kevin McHale is dating actor Austin P. McKenzie. Their affair was started in 2017. similarly, in 2018, he came out as gay.

In the past, he has been into multiple relationships. He was in a relationship with Glee co-star, Jenna Ushkowitz from 2009 to 2010.

Before that, Kevin dated an actress, Peri Mckinnon since 2005. But things started falling apart in 2009 and they separated.

He also had affairs with Amber Riley in the past.

Who is Kevin McHale?

Kevin McHale is a singer, an actor, and a dancer. Additionally, he is also a radio personality. He is famous as the former band member of the band, NLT.

Presently, he is a prominent figure in the media as the star of an American musical comedy-drama television series, “Glee”. He portrayed the role of Artie Abrams in the series. Furthermore, he also hosts the program, “Sick of My Own Voice” along with 3 other hosts on Dash Radio.

Kevin was born in Plano in the state of Texas on June 14, 1988. He belongs to Irish ethnicity and nationality is American.

As a child, he was a friend of singer and actress, Demi Lovato. He grew up with her.

As per his education, he attended Academy of the Canyons High School in the Santa Clarita Valley in California. Other than that, there is no further information regarding his academic achievement or education.

Kevin McHale is a guy involved in multiple professions. In 2006, he joined the band, NLT. The “NLT” stands for “Not Like Them”. He along with the band released their first single, “That Girl” in 2007. Although they worked hard for the best of the band, the band didn’t work that well and they split. Afterward, in an interview, he stated that he is planning to go solo to pursue his music career.

As per his acting career, he made his debut on TV in an episode of “All That”. Afterward, he went on playing several minor roles in TV series. Consequently, his major mainstream success came after he joined the cast of TV series, “Glee” in 2009. She portrayed the role of Artie Abrams in the series from 2010 to 2015. Contrary to TV, he made his film debut in a short film, “Ruthless” in 2007.

Additionally, he did many other TV series like, “Zoey 101”, “True Blood”, Chatty Man”, and “The Office”. Similarly, he starred in the concert film, “Glee: The 3D Concert Movie” in 2011. Later in 2015, he portrayed the role of Wooly in the film, “Boychoir”.In 2010, he won Screen Actors Guild Award for his Outstanding Performance in “Glee”.

He is a talented and in-demand actor. Consequently, he has an estimated net worth of $16 million and his salary is $2 million.

Kevin was part of controversy fueled by disabled people. As he joined the cast of Glee as a disabled character, disabled people were upset about it. According to them, the disabled person should have been cast in the disabled role. Presently, there are no rumors that surround his personal and professional life.

Kevin McHale has a height of 5 feet 8 inches. He has dark brown hair and blue eyes. His body weighs 69kg.