Kevin Paffrath is a YouTuber, financial analyst, landlord, and real estate, broker. He is married to Lauren Paffrath and is the father of two kids. 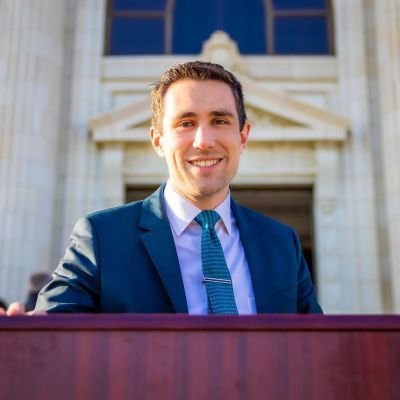 Kevin Paffrath is living a blissful conjugal life. He is married to Lauren Paffrath. Lauren works as a property manager for The Paffrath Organization.

The duo met on a high-school trip to Paris. Further, there is not much known about their married life. The beautiful couple is blessed with two sons named Jack Paffrath and Max Paffrath.

Currently, Paffrath lives in Ventura, California alongside his family.

Who is Kevin Paffrath?

Kevin Paffrath is a YouTuber, financial analyst, landlord, and real estate broker from the United States. He has amassed fan followers on his Instagram account where he is best known for posing fitness and weight lifting videos.

Kevin was born on the 28th Of January, 1992 in Germany. He is also known as Meet Kevin. Paffrath is a native of Wuppertal when he was 18 months child, his parents moved to the United States.

At the age of six, his parents got divorced. However, he hasn’t yet disclosed his parents’ identity in the media.

Talking about his education, he went to Buena High School. He then attended Ventura College and later joined the University of California, Los Angeles major in economics, accounting, and political science.

Further, he holds American nationality but his ancestry is unknown.

In 2010, Kevin earned his real estate license, and the same year he purchased a condemned house along with his future wife. Then, they started renovating additional homes and renting them out. Soon after, they own the real estate business The Paffrath Organization, through which they buy, renovate, and rent properties in southern California.

Similarly, they began to offer construction services through their organization in 2017. As of 2021, Paffrath and his wife owned a total of 22 properties. On May 17, 2021, Paffrath announced his candidacy as a Democrat in the 2021 California gubernatorial recall election. Furthermore, his YouTube videos also discussed topics relating to real estate, the stock market, COVID-19 stimulus checks, cryptocurrency, and airline points.

He also teaches online courses on the Teachable Platform.

He has an estimated net worth of around $20 million as of 2021. As CNBC reported, Paffrath earned close to $10 million from YouTube over the last 12 months in 2021.

Talking about Kevin’s physical appearance, he has a towering height. Likely, he has a brown pair of eyes and brown hair color.

He has a self-titled YouTube channel with nearly 1.73m subscribers.