Kevin Smith was involved in a relationship that lasted for 2 years with American actress Joey Lauren Adams from 1995 to June 1997.  They don’t have any children from this relationship.

Kevin is currently a married man. He dated 46-year-old American Actress, Jennifer Schwalbach Smith for 3 months after getting together in 1999 until finally, they tied the knot on 25 April 1999.

They have a 17-year-old daughter Harley Quinn Smith from this marriage. The 18-year-old marriage has been going strong as no rumors regarding the divorce or any extramarital affairs have surfaced as of now. 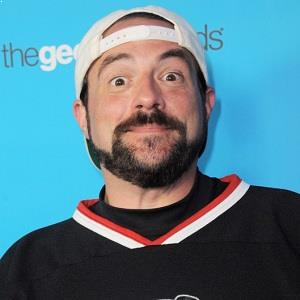 More often than not, a hero’s most epic battle is the one you never see

it’s the battle that goes on within him or herself

The writer crafts their ideal world. In my world, everyone has really long conversations or just picks apart pop culture to death and everyone talks in monologue

All these people who say success changes people

well, no, it just magnifies what's there.

Who is Kevin Smith?

Kevin Smith is an American actor, filmmaker, comedian, public speaker, author, and podcaster who has been part of numerous successful movies including ‘Jersey Girl’, ‘Dogma’, ‘Clerks’ among others.

His career as a comic book writer has also been successful having authored, “Spider-Man / Black Cat: The Evil that Men Do”, and “Chasing Dogma”, he has also set his mark as a successful author.

Kevin was born in Red Bank, New Jersey on August 2, 1970. His ethnic background is mostly German along with some Irish and English, ancestry. His nationality is American.

He was born to Grace (Schultz) and Donald E. Smith. He has a sister named Virginia Smith and a brother named Donald Smith, Jr. His sister used to direct him and he used to perform. His brother would be the audience.

Kevin attended Henry Hudson Regional High School and later joined e New School in New York, but did not graduate. As he was an overweight teen, in order to successfully socialize with friends and girls, he developed into a comedic observer.

Kevin was enrolled at Vancouver Film School for four months and returned home to work at a convenience store in Leonardo where he previously worked.

His dream of directing a film only became possible after he raised $27,575 and cast friends and acquaintances in the film’s major parts. The movie ‘Clerks’ was screened at the Sundance Film Festival in 1994, where it won the Filmmaker’s Trophy.

His movie ‘Clerk’ went on to become a critical and financial success and earned $3.1 million. Having succeeded through his first film, Kevin has since then directed and produced numerous movies and television series.

Kevin won the Lifesaver Achievement Award in 2008 and has won the other 13 awards. He has 21 nominations to his name for different awards in his career as of now.

Kevin Smith: Salary and Net Worth

Although the exact salary of Kevin is not known, his net worth is estimated to be around $ 25 million.

Kevin was rumored to have written the fake script to ‘Batman V Superman’ which he denied later.

He has also been rumored to have been involved in a relationship with Kimberly Loughran and Wendy Leigh Smith. As a comic book author, some of the contents of his books has often been the subject of numerous controversies.

Kevin has a height of 5 feet 9 inches (1.75 m). He shared his weight problem and how he overcame it on Twitter during 2015 after losing 85 pounds. He has brown hair color and his eye color is also brown.

Chef Kevin Gillespie speaks about his rare renal cancer on the Decaturish podcast!