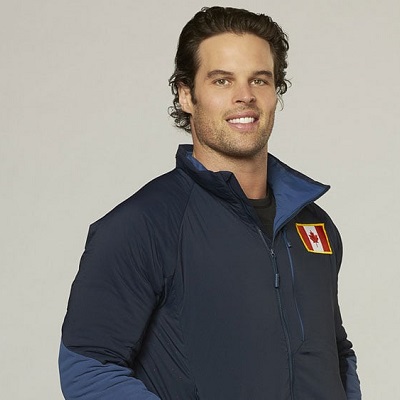 Kevin Wendt is currently in a relationship. He is currently in a relationship with Astrid Loch with whom he competed on the season five of another ABC reality show, Bachelor In Paradise. Kevin shared an Instagram post on Tuesday, 3rd September and revealed his engagement with to his BIP co-star, Astrid Loch. The cost of the ring was between approximately $20,000- $35,000.

Through the post, the couple revealed that they became engaged on 28th August 2019, and they are enjoying a romantic relationship together.

Previously, Kevin engaged to Jasmine Lorimer in the finale of the show but they called it quits just after five months of dating. In addition, he was also in a relationship with Ashley Iaconetti while appearing on The Bachelor Winter Games together in February 2018.

Who is Kevin Wendt?

Kevin Wendt is a Canadian reality television personality who came into limelight for having competed in both The Bachelorette Canada and The Bachelor Winter Games.

She was born on 1st February 1984, Toronto, Canada to the Canadian parents. As of 2019, his age is 35 years old while his horoscope is Aquarius. His mother’s name is Jill Wendt while his father’s name is still missing from the media. Also, he showed an interest in playing baseball since childhood.

Kevin holds Canadian citizenship but his ethnicity is unknown.

Initially, he served in the navy and worked as a firefighter. In the year 2017, he attended the home opener of a Canadian professional baseball team, Toronto Blue Jays.

After that, he joined the first season of The Bachelorette Canada in September 2016 with Jasmine Lorimer, an Ontario-based hairstylist. It is known that Kevin competed on the show to win Jasmine’s heart along with Mike Ogilvie, Benoit Beausejour-Savard, Mikhel Sickand, Kevin Pattee among others. Later, he won the show while Sickand and Ogilvie were the first and second runner ups of the show respectively.

In addition, he competed on the fifth season of ABC hit show, Bachelor In Paradise, in August 2018 and he was partnered with Astrid Loch who is a patient care coordinator for Soler Aesthetic Plastic surgery. Further, he also competed against Ashley Iaconetti on The Bachelor Winter Games.

He has an estimated net worth of around $750k as of 2019 and also received $250k as prize money after winning The Bachelorette Canada season 1 but he is yet to share the exact amount of his salary to the media. As of now, he surely lives a lavish life with his family members.

He stands a height of 6 feet 1 inch while his body weight is around 88 kg. His chest size, bicep size, and waist size are 42 inches, 16 inches, and 32 inches respectively and shoe size is 10 (US). In addition, he has dark brown colored hair while his eyes are green in color.

The Couple Jasmine Lorimer and Kevin Wendt Stars of ‘Bachelorette Canada’ have separated just five months after Finale! Find out the reason behind the Split