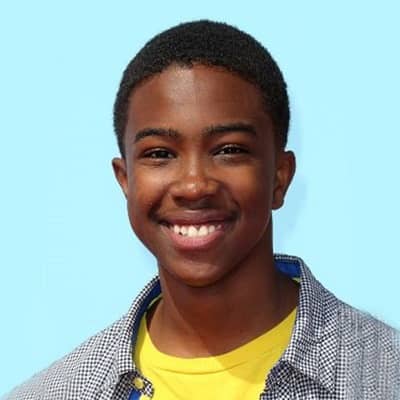 As per the sources, Khamani has not been dating any girl which is good news for his female fan followers. Further, there is no past relationship, marriage, and divorce. If he is in any relationship he has kept secret and not revealed anything about his love life. As for now, we might consider him to be a single boy enjoying his single life with his pals.

Who is Khamani Griffin?

His mother, Gena Sexton divorced his father when he was young. Likewise, he has an older brother and a younger sister. His older brother De’Von Flournoy is a football player and model. he was interested in acting and has been acting since his early days.

He is of American nationality and Afro-American descent. Similarly, his birth sign is Leo.

Griffin was admitted into a pre-school at the age of 2 years and 9 months. Besides this, there is no information about his education.

Khamani made his professional television debut in the family comedy film Daddy Day Care in 2003. Moreover, he has portrayed the role of Bobby James in the UPN/The CW Tv series, All Of Us. His role as Bobby James in the series got huge recognition and much loved by the audiences, reviewers, and critics. Following this, he has acted in many TV series that includes:

among others. Besides, TV series he has acted in the 2007 film Norbit in the role of the character Norbit (Age 5). Similarly, he also appeared in the movie ‘Hip-Hop Headstrong’ as Timmy. He has given his voice to the movies such as:

Of all his acting, movies, and dedication, why not he has a net worth of around $400K. Likewise, Khamani is a dedicated and hardworking person who focuses on his professional career.

There are no rumors and controversies about his personal life or professional life. Likewise, he keeps himself away from the limelight and tries to maintain personal space.

Khamani stands 5 feet and 10 inches tall and weighs around 72 kg. Similarly, he has a fit body. He has black hair and dark brown color eyes.

Charlie Murphy
Tags : All Of Us film actor Sofia the First