Who is the girlfriend of Khris Middleton?

Khris Middleton is romantically hooked up with a preschool teacher and advocate, Samantha Dutton.

The couple started seeing each other in 2016 and publicly announced their relationship in 2017 after Middleton shared the picture with his girlfriend on his Instagram account.

On April 23, 2019, the duo welcomed their first baby daughter, Audrielle Middleton. So, the couple seems to be very happy with each other and are willing to take their relationship up to the marriage. 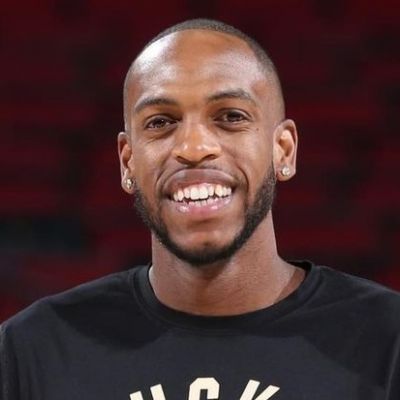 Who is Khris Middleton?

He has become a three-time NBA All-Star and an NBA Champion.

Khris Middleton was born in Charleston, South Carolina, the United States on August 12, 1991. Middleton is 30 years old as of 2022 and holds an American nationality.

He maintains All-American ethnicity while his birth zodiac sign is Leo according to the astrological chart.

He was born James Khristian Middleton to his parents, James Middleton and Nichelle Middleton. He was raised along with his older sister, Brittney.

He also has a cousin, Josh Powell, who has been in NBA, and Kenny Manigault, who is also a basketball player for Wichita State University.

Coming towards his educational life, he went to PorterGaud for schooling. Later, he enrolled at Witchita State University.

From 2009 to 2012, he played college basketball for Texas A&M Aggies. With the 39th overall pick, he was drafted by the Detroit Pistons in the 2012 NBA draft. He went on to play the various games on the team and lost the NCAA Tournament over Flordia State by 57-50.

He was then picked in the All-Big 12 Second Team and was given the name, of the 10-man All-District VII team. National Association of Basketball Coaches gave him the title of All-Eight District second-team. He announced for the NBA Draft, forgoing his final season of collegiate eligibility on April 9, 2012.

Middleton began to play for the Milwaukee Bucks along with Viacheslav Kravtsov and Brandon Knight on July 31, 2013. He finished the game with 29 points in a 109-105 win over the Washington Wizards on December 6, 2013.

He had a hamstring injury that needed surgery on September 21, 2016. He then debuted his season after recovery by missing the first 50 games and scored five points in 15 minutes in a 106-108 loss against the Miami Heat. Later, his team won over the Los Angles Lakers after he ended the game with 30 points by 107-103.

Again, he re-signed the five-year, 178 million USD contract with Milwaukee Bucks. The eventual Eastern Conference champion, Miami Heat eliminated Middleton and the Bucks in the postseason.

Later, he was declared to be selected as an All-Star for the 2022 NBA All-Star Game. Again, Buck won over the Phoenix Suns after he made 44 points with 8 rebounds and 5 assists b 132-122.

The net worth of basketball player, Khris Middleton is estimated to be around 50 million USD as of 2022 owing to his long year of a successful career.

Though, his yearly/ monthly salary and earnings are still under review.

Khris Middleton is able to well-maintain his professional as well as personal life that has not involved him in unnecessary rumors and controversies.

Having amazing physical attributes, Khris Middleton has an athletic body. He stands at the height of 6 feet 7 inches and weighs around 98 Kg. The detailed info on body measurements of Middleton has not been available yet.

Talking about the physical appearance, Khris Middleton with a dark complexion has a couple of black eyes and hair of the same color as well.

Khris Middleton is a famous personality who has a huge fan following on his social media accounts. He has an Instagram account under the username, @k_mid22 which has around 410K followers while his Twitter account is enriched with more than 107.9K followers.

There is also an official Facebook page under his name, that has garnered about 603K followers. He also has a self-titled youtube channel that has over 2.44K subscribers.