Kiana Lede is an American singer. Kiana is also an actress, she has composed a few tracks and is a professional pianist. She is in a relationship.

Kiana was reportedly dating Australian singer Luke Brooks in 2014. Kiana and Luke were often spotted spending time together and were even pictured smooching at a prom-themed party in 2014. 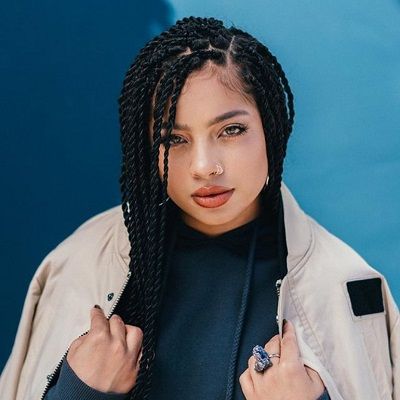 Who is Kiana Lede?

Kiana Lede is an American singer. Kiana is also an actress, she has composed a few tracks and is a professional pianist.

She is well known as a soul and R&B singer who rose to fame after winning the 2011 ‘KIDZ Star USA’ competition.

She has appeared on MTV’s horror series Scream: Season 2 as Zoe Vaughn.

Kiana Lede was born Kiana Ledé Brown on April 3, 1997, in Phoenix, Arizona, the United States. She is an Aries.

Her father is Michael Brown and her mother, Shakira Matherly, is of all American ancestry.

Kiana began her career in the TV industry with the movie Deadline: The Rising as Evacuee/ Zombie and Television series Temporary Dreams in the year 2006.

She started her singing career in 2012, with the singles ‘Hey Chica’ and promotional singles’ Do the Mermaid of the album Barbie in A Mermaid Tale 2.

She appeared in the Television series, Beach. She also released her album titled Soul. food Session along with that, she made an appearance in the song called’ Don’t’.

Ledé has been cast in the series regular role as Zoe Vaughn in the second season of MTV’s Scream. Her next album is Christmas, also released her second single saying Home for Christmas. She released her singles including Choose You featuring Pell, One of the Days, and Fairplay.

She released her next album titled Selfless. She also released her new singles, ‘Ex’ from the album Selfless, and promotional singles big Spender’. She also made her appearance in the song running to the Sky’.

She released her new album entitled Myself and singles such as Can I, Title, and Easy Breezy. Kiana was featured in songs like Bruised Not Broken and Mama.