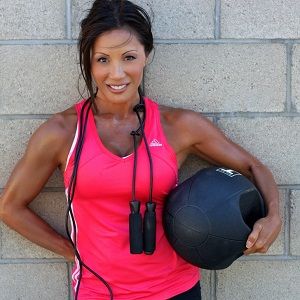 Treat everyone with respect and kindness. Period. No exceptions

When I meet successful people I ask 100 questions as to what they attribute their success to. It is usually the same: persistence, hard work and hiring good people

True wisdom listens more, talks less and can get along with all types of people.

Kiana Tom is a married woman. She tied the knot with Dennis Breshears, the captain of the fire department in March 2002.

The beautiful couple is also blessed with two beautiful daughters. They are Asialea Breshears and Anelalani Breshears.

It seems their bond is so strong. As of now, the couple has maintained a sound relation and living happily together.

Who is Kiana Tom?

Kiana Tom is a fitness expert, television host, and actress from America. She got huge recognition after introducing in the ESPN show called Kiana’s Flex Appeal. Moreover, Kiana is also the founder and host of the show.

Besides this, she has also featured in a movie named Universal Soldier: The Return.

Kiana was born on March 14, 1965, in Maui, Hawaii, United States. She grew up in Hawaii with her parents. Her father, Layne Tom Jr. was an actor and her mother’s name is Marilynn Chow. There is not much information about her siblings.

She belongs to a mixed ethnicity of Hawaiian, Chinese and Irish.

Kiana Tom began her career as a cast member of the syndicated program BodyShaping in 1988. After working with her team, in 1995, she began her own show named Kiana’s Flex Appeal. In the program, Kiana taught about various exercises, gym training, and aqua flex training. Furthermore, the show lasted for almost six years and ended in 2001.

After the success of Kiana’s Flex Appeal, ESPN introduced other popular shows alongside Kiana such as Kiana’s Too Fit 2 Quit, Summer Sizzle with Kiana & Hot Summer Nights with Kiana.

In addition, Kiana has also hosted ABC Super Bowl Nightlife. Besides her shows, she has also appeared in the movie, Universal Soldier: The Return alongside Jean-Claude Van Damme. Moreover, she is also an author of Kiana’s Body Sculpting as well as a cheerleader for the Oakland Raiders.

In her fitness career, Kiana has also won United States Sports Academy Award for her brilliant work towards fitness.

This host and fitness expert’s net worth is estimated at around $1 million. Moreover, her salary is not revealed.

Currently, there are no desperate rumors regarding her personal and professional life. It seems she is doing her job without affecting others.

So far, she has not been the topic of controversy. She has total focus only on her work so that she hasn’t faced any controversy yet.

Kiana Tom has a perfect fit body with a height of 5 ft 6 inches and weighs 58 kg. Being a fitness guru, she has maintained a perfect body shape.

Moreover, she has beautiful brown eyes and dark brown hair. In addition, her bra size is 36, waist size 23, and hip size is 35 inches.