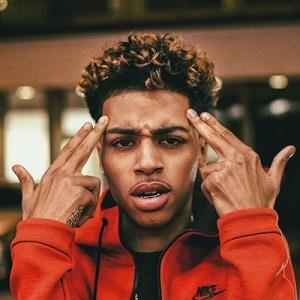 Lucas Coly (Kid Lucas) is in a relationship with YouTuber and Instagram star Amber H. The two first met via Instagram in November 2015.They later met in person and began dating, and eventually started living together. Both of them appear on each other’s Instagram pictures, as well as YouTube videos.

Who is Kid Lucas?

Kid Lucas (Lucas Coly) is an American Vine sensation, social media star on Twitter and Instagram, and recording artist.  He is a French-American rapper and social media personality.

Lucas was born in France on July 8, 1997, as Lucas Coly. When he was about eight years old, his family moved to Texas, USA, where he stayed for about two years.

Additionally, he has a younger brother who is about ten years younger than him. He spent most of his childhood years in Detroit. He is of French-American nationality. Furthermore, he belongs to a mixed ethnic background of African-American and French.

Talking about his education, Lucas struggled with grades at school. Later, he moved to San Francisco with his parents after barely completing his graduation.

Lucas posted his first video to Vine on July 9, 2013, and only posted two more videos for the rest of the year.

Furthermore, he started to upload videos consistently in April of 2014. He earned over 450,000 followers on Vine before the app was shut down and he has more than 1.5 million followers on Instagram as of now. He posted his first music video on YouTube on August 1, 2013.

Lucas became a member of the trio Tha Diamondz with WillGottheJuice and Dillyn Troy. In September 2016, he released the mixtape ‘Prince of France’, which contained 20 tracks. The music video for his song ‘I Just Wanna’ from the mixtape reached over 4.7 million views on YouTube and is currently the most popular video on his channel.

Additionally, after the success of the mixtape, he came back with another mixtape, titled ‘I Keep Pushing Vol 1’, which was released in June 2017. At present, he has over 171k subscribers on YouTube and 112k on SoundCloud.

Lucas has attracted criticism from some of his fans due to his relationship with Amber. At present, there are no rumors concerning him and his career. Furthermore, as of now, he has not been part of any notable controversies in his career.

Talking about his body measurement, Lucas has a height of 1.85m. Additionally, he weighs around 70 kg. Furthermore, his hair color is light brown and eye color is brown.