Kiefer Sutherland is a British-born Canadian actor, producer, director, and singer-songwriter. Currently, Kiefer is having an affair with Cindy Vela.

Kiefer Sutherland was in a romantic relationship with Camelia Kath. After knowing each other long enough, they married in 1987.

Together they gave birth to a beautiful daughter named Sarah Jude. Even though they had a perfect family anyone would dream of, they decided to divorce in 1990.

Later on, he called off marriage after engaging with Julia Roberts which attracted a lot of attention. Afterward, he married Kelly Winn in 1996 and had two sons together. However, the pair separated in 1999, and officially divorced in 2008.

Later, he stayed in multiple relationships with Ashley Scott, Tricia Cardozo, Reiko Aylesworth, Catherine Bisson, and Bo Derek which didn’t last long. His latest relationship was with Siobhan Bonnouvrier from 2009 to 2011.

Currently, Kiefer is having an affair with Cindy Vela. They started to see each other from 2014. 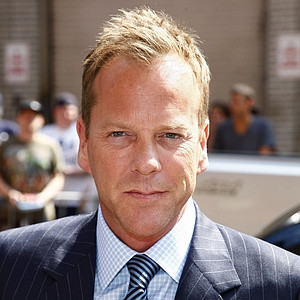 I feel extraordinarily peaceful when I'm watching the sun set

I've always traveled with a picture of my daughter from 1989, her kindergarten school picture, that has 'I love you, Daddy' written on it. She's always made fun of me because I never changed that picture out. It's like my resistance to her getting older. It was the first thing she'd ever written to me and it means the world to me

I do believe very strongly that all of us and all of the other things in the context of our planet with Mother Nature, all of these things absolutely have a profound effect.

Who is Kiefer Sutherland?

Kiefer Sutherland is a British-born Canadian actor, producer, director, and singer-songwriter. He garnered a lot of fame and popularity for appearing as Jack Bauer on the Fox drama series 24.

Later on, he won various awards in his career such as Emmy Award, a Golden Globe Award, two Screen Actors Guild Awards.

Kiefer was born December 21, 1966. He spent his childhood in the place where he was born, London, England. His nationality is Canadian and ethnicity is mixed(Scottish, English, Irish).

He was born to, Donald Sutherland and Shirley Douglas, who both were acting professionals. This sparked him an interest in acting from a young age. He grew up with two twin sisters.

Later on, his parents divorced and he moved to Toronto with his mother. However, not much is there regarding his earlier days and childhood. Neither his fan has asked him about his earlier days, nor he has said anything about it.

Despite that, it will not be wrong to say that he had a decent upbringing which has played a major role in his success.

Initiating his career, Kiefer Sutherland appeared in his first feature film, Max Dugan Returns in 1983. His talents landed him in films including The Bay Boy, Stand by Me, and The Lost Boys.

Eventually, his most awaited breakthrough came as a role in Flatliners (1993), a psychodrama alongside Kevin Bacon, William Baldwin, and Julia Roberts. In 1995, he again filed blockbuster A Few Good Men, in his name. later he stepped out as a director for television drama Last Light.

Moreover, he preferred dark, intensely psychological scripts. As a result, he starred in the movies in the 1990’s such as The Last Days of Frankie the Fly, Dark City. In 2000, he expanded his field by acting in a satirical comedy, Picking Up the Pieces.

In the same year, he acted on hit series 24 as Jack Bauer. This role secured him a Golden Globe award. Furthermore, he starred in Fox’s thriller Touch in 2012.

Currently, he is starring in Designated Survivor airing on ABC. The exceptional talents he displayed in his career inevitably amassed him some recognition.

During his entire career, he had always maintained top-notch professionalism over his work. His work was always admirable, and his hard work reflected on how well he did in his career.

He always maintained a decent and admirable image in his entire career without attracting any rumors and controversy. Instead of attracting unwanted attention, he made everyone believe that he had no interest in becoming a controversial figure.

Kiefer Sutherland has a height of 5 feet 9 inches. He has light brown hair and blue eyes. His body weighs 76kg.