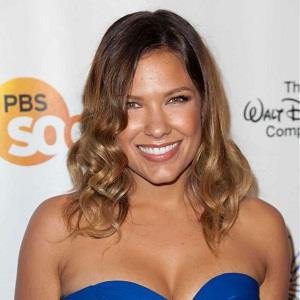 There is something to be said about a guy who is attractive and doesn't know it. I hate men who are overconfident.

I know with me, you really have to, like, pound me over the head to say, 'I like you. I really like you' to get me to see it. I think if you're too passive, you just fall into that friend role. And that's hard to break out of.

Currently, she is a married woman. In 2010, Sanchez began dating actor Zach Gilford, with whom she co-starred in the ABC television pilot ‘The Matadors’.

In August 2015, Sanchez announced that she and Gilford were expecting their first child, a son, that November but in October 2015, the couple announced that Sanchez had suffered a late-term miscarriage.

On November 29, 2017, they welcomed a daughter, Zeppelin Adele, born via surrogate.

Kiele Sanchez was previously married to American Writer Zach Helm. The pair were married for 7 years.

Who is Kiele Sanchez?

Kiele Sanchez is an American actress. She starred in the A&E Network drama ‘The Glades’.

Previously, she had starred as Anne Sorelli in The WB comedy-drama ‘Related’ and as Nikki Fernandez on the main cast in the third season of the ABC television drama series ‘Lost’.

Sanchez was born in Chicago, Illinois on October 13, 1977. Her father Oscar Sanchez is a racetrack jockey agent.

Additionally, she became interested in the world of acting at an early age and began her acting career at Glenbard North High School in Carol Stream, Illinois, when she performed in a school production of ‘The Grapes of Wrath.

She is of American nationality. Furthermore, she belongs to a mixed ethnic background of French, Polish, and Puerto Rican.

Sanchez auditioned for MTV’s Wanna Be a VJ contest in New York. She was selected as one of the five finalists but did not win the competition.

Next, she landed roles in the short-lived drama series ‘That Was Then’ and the sitcom ‘Married to the Kellys’.

In 2003. Since then, she has appeared in numerous movies and television series.

Sanchez has more than 25 credits as an actress.

Some other movies and television series that she has appeared in are ‘Kingdom’, ‘The Purge: Anarchy’, ‘The Glades’, ‘Burn Notice: The Fall of Sam Axe’, ‘Matadors’, ‘Redemption Road’, ‘A Perfect Getaway’, ‘Samantha Who?’, ‘Girls on the Bus’, ‘Related’, ‘Stuck on You’ and ‘Rennie’s Landing’ among others.

Kiele joined her husband Zach in a recurring role as Bridget Voit in November 2022, the wife of Gillford’s character Elias Voit in Criminal Minds: Evolution.

Sanchez has not revealed her current salary. However, she has an estimated net worth of around $500 Thousand.

Sanchez recently came to the news after she and Zach welcomed a daughter on November 29, 2017.

Furthermore, there are no rumors or controversies concerning Sanchez and her career at present.

Talking about her body measurement, Sanchez has a height of 5 feet 2 inches (1.57 m).

Her hair color is light brown and her eye color is hazel.

Sanchez is active on social media.

She has a huge number of followers on social networking sites such as Twitter as well as Instagram.