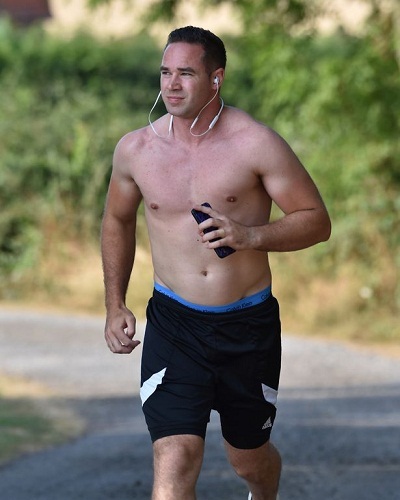 Kieran Hayler seemed extremely happy to flaunt his new love! He took his new girlfriend Michelle Penticost for the showbiz event on Friday night. This is the first time that they have attended a celeb event as a couple and together!

Kieran Hayler at the Shocktober event with his recent girlfriend

Kieran Hayler, 31 was seen at the showbiz event called Shocktober Fest on Friday night. But he was not alone this time. He was accompanied for this Halloween event launch by his new girlfriend Michelle Penticost who works as an air hostess. The couple has been dating since this July. For the event, they were seen in a matching outfit from head to toe.

Both had worn black outfits and Michelle had additionally worn a pair of ankle boots and on the face, she had applied a bright pink lipstick. The couple seemed extremely happy and in love at the event as they posed for pictures for the paparazzi.

Just a few days before this event, it was rumored that Kieran has already proposed and got engaged to his new lady love Michelle. The rumors had cropped up after Michelle was seen with a glittering new ring on the engagement finger. Kieran, however, denied the rumors. He stated on his Instagram:

“Another b******t fabricated story!!!!? Apparently women can’t wear jewellery. So happy to have Michelle supporting me.”

It was later revealed by a source that the ring actually is from the side of Michelle’s family. They have yet not got engaged since the divorce proceedings of Kieran with Katie Price are still underway. Katie had verbally abused Michelle earlier but after the therapy sessions, she is better and has wished Kieran well.

However, even after the split, Kieran and Katie has maintained good friendship and wish their children on their birthdays!

About the event and the attendees

This annual event was held at the London’s Tulleys Farm and the other celebrities who were present on the occasion included Charlotte Crosby and other Love Island stars.

The winners of the Love Island 2018 Jack Fincham and Dani Dyer were also present. Charlotte was seen sporting a thigh-tight mini dress with an orange bomber jacket. This was matching with the surroundings and the pumpkin display.

You may like to read Pete Davidson and Ariana Grande share a sweet kiss onstage! Know more about their relationship and engagement!

Kieran Hayler and his previous relationship

Kieran Hayler was earlier married to Katie Price. He has two children with Katie and they are Jett, 5 and Bunny, 4. Kieran had recently opened up in an interview with The Sun in which he had given some explosive comments about his estranged wife Katie Price. Katie is under treatment for a month at the rehabilitation center The Priory for her post-traumatic stress disorder.

Kieran had told in the interview that Katie is still obsessed with her ex-husband Peter Andre to whom she was married from 2005 to 2009. Katie married him after a whirlwind romance and has two children with Peter namely son Junior, 13 and daughter Princess, 11. Kieran had said:

“There is not a day that went by in five years that I was married to Kate that she didn’t mention his name.”

“[I’m] not saying in a positive way because it pretty much was never positive.”

“But, for somebody to talk about their ex-husband so much, it almost makes you think that maybe he was the love of her life and she never got over that.”

After her marriage with Kieran ended, Katie moved on in life and began dating her personal trainer Kris Boyson. It was a whirlwind romance which ended as fast as it had started. She was later spotted with Essex businessman Alex Adderson.

Also read Too soon, too good? Celebrities with whirlwind engagements within half a year of their dating!

Kieran Hayler is an English television personality and a former stripper. He has appeared in the reality television show ‘Big Brother’. Furthermore, people mostly recognize him for his marriage to TV personality and model Katie Price. More Bio…

Jennifer Garner purchases a new house for herself after her divorce from Ben Affleck!
Tags : Divorcee Katie Price's ex Stripper