Kiff VandenHeuvel is renowned as an actor, director, podcast host.

Kiff VandenHeuvel is a married man and father of a daughter. He is married to Cheri Vanden Heuvel who is also a voice-over artist, stage actress, and writer.

The couple tied the knot on December 15, 2001. Together the pair has a daughter whose name is unknown at the moment.

Currently, Kiff resides in Los Angeles with his wife and daughter. 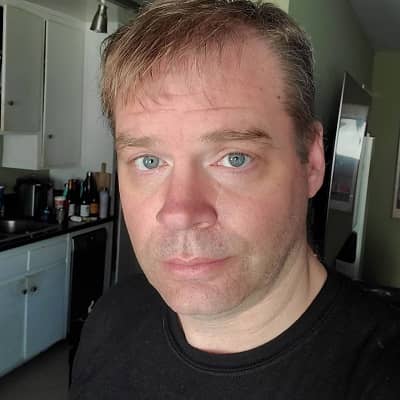 Who is Kiff VandenHeuvel?

Kiff VandenHeuvel is renowned as an American actor, director, podcast host, and teacher of improvisational comedy and voiceover.

He is best known for his role on BioShock Infinite as Zachary Hale Comstock.

Kiff’s birth name is Christopher Jon VandenHeuvel. He was born on April 24, 1970, in Grand Rapids, Michigan, the U.S. VandenHeuvel holds an American nationality whereas his ethnicity is unknown.

He is the grandson of Ralph Heynen who was a pastor at Pine Rest in Cutlerville, Michigan. The actor once shares his family pictures on his social media sites including his parents and four brothers but hasn’t revealed their detailed information till now.

He is the oldest one among five siblings. His youngest brother named Andrew Vanden Heuvel had discovered an asteroid in 2003.

From an early age, he was interested in voice-over when he went to visit his grandparents, he made a straightaway to his grandfather’s study and played with the recording equipment.

Talking about his educational background, he completed his secondary school at South Christian High School.

He graduated with a degree in Communications Arts and Sciences from Calvin College, in Grand Rapids, MI.

Kiff started his career as a voice-over artist and he did the voice-over for numerous videogames such as Midnight Club 3: DUB Edition (2005), Sacred 2: Fallen Angel (2008), World of Warcraft: Warlords of Draenor (2014), and more.

In 2012, Kiff made her on-screen debut as a construction worker on an Episode of Rodney Tape Face in Incredible Crew. In the same year, he was cast in Guides in the role of Garrett Monahan.

He made his film debut in 2013 as a voice actor in Star Trek Into Darkness. He starred in the role of Wayne in Behind the Candelabra alongside Michael Douglas, Matt Damon, Dan Aykroyd, and more.

Lately, he features in a crime thriller film, The Little Things in 2021 in the role of Tow Truck Driver. He is also the host of the voiceover podcast, ‘All over Voiceover with Kiff VH’.

Some of his notable film and television series are enlisted in the table,

To date, Kiff has not been part of any sorts of rumors and scandals that create headlines in the media. Also, he stays miles away from such controversial acts.

Kiff’s main source of income is his profession as an actor. Besides, he also hosts podcast shows. As per other online sources, he has an estimated net worth in the range of $1 million to $5 million.

But, his exact salary, yearly income, and real estate are still under review.

The actor stands at the height of 6 feet 1 inch tall. He has a brown hair color and blue pair of eyes.

The actor has an average weight but his exact body figure isn’t yet disclosed yet.

The actor is active on Instagram under the user name @kiffvh where he has more than 3k followers. Similarly, he has a verified Twitter account with over 3.9k followers. He is also available on Facebook.