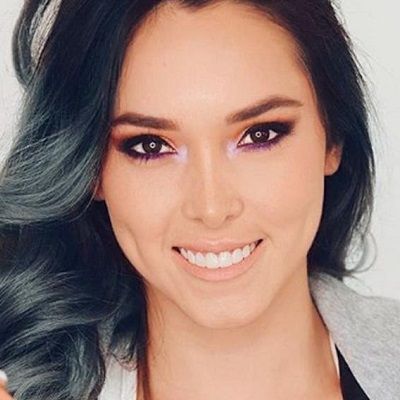 Kika Nieto is in a relationship with another YouTuber star Santiago Macias. Santiago has a YouTube channel under the name of santimaye and has more than 2.41 million subscribers.

They started to date each other in May 2009. Their relationship took the next level and they got engaged in June 2018. Then just after three months i.e 21 Sep 2018 this couple exchanged the vows.

Kika Nieto was looking like a princess by wearing a silhouette, a tulle skirt, and a gorgeous bodice with long sleeves.

Kika is an animal lover and has three pets, two cats and a dog. Her cat’s name is Nico & Kelly and her dog’s name is Queen.

Who is Kika Nieto?

Kika Nieto is a Columbian social media personality plus designer and photographer.

She is known for her videos on social networking site YouTube where she posts challenges, vlogs & fashion, and makeup content videos.

As per siblings, she has a sister named Jacqueline Nieto Marquez.

She holds a Columbian ethnicity.

Kika is a graphic designer plus photographer by profession. She has joined a group called Team QUEEN in 2018. This web group is about creating various vlogs and videos relate to challenges.

Kika Nieto first opened her YouTube channel on Oct 4, 2011. She titled it kikanieto and started to upload videos from Jan 2013. This channel is subscribed by more than 8.12 million subscribers.

Due to the popularity, Kika opened her second YouTube channel on Aug 15, 2017. It is named as bykikanieto and has around 1.77 million subscribers.

Kika Nieto is very popular on social media TikTok. She mostly uploads hilarious videos on her account. These videos are loved by more than 2.2 million followers.

This YouTuber had once uploaded a video saying that it is not good to be homosexual but she still tolerates them. She said that being a homo is against her religious beliefs.

This video offends the LGBTIQ community and they started to backlash.

However, Kika apologized for the video in her other video. In it, she said, that it was a mistake to use the tolerate word. In fact, she respects the LGBTIQ group.

Kika is one of the successful web stars. Because of her content and popularity, she has been nominated for Favorite YouTuber by Kid’s Choice Awards Edition Colombia in 2017.

Moreover, she has won the Freshest Face in 2017 given by MTV MIAW.

Talking about the income, this YouTube personality has an estimated net worth of $500 thousand US.

Talking about Kika Nieto’s body features, she has dark brown eyes and natural black hair. She has a height and a weight of average size.

Kika Nieto joined Twitter was created in Aug 2010 and has over 776.1k followers.

Her Instagram has more than 4.8m followers and around 847 posts. She usually posts different fashion looks.

She is also active on Facebook since June 23, 2015. In it, she is followed by more than 1.3 million followers.