Kim Caramele is an American producer, actress, and writer. She is married.

Kim Caramele is a married woman. She exchanged her vows with her long time boyfriend Vincent Caramele in 2008. This couple met each other in the first year of their graduation at Pace University.

Their wedding was a courthouse marriage in New York, with only a witness her sister, Amy Schumer. 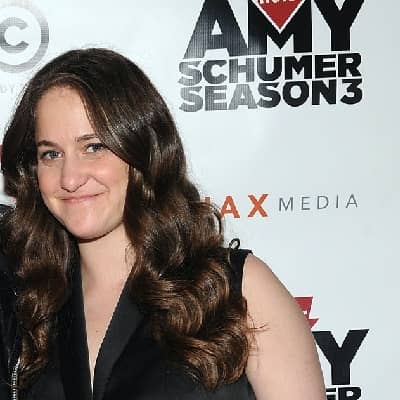 I got married because I happened to meet my best friend and fall in love pretty young, but I never thought I was going to get married. Amy and I grew up very similar in that having a husband isn’t anything we ever dreamed of or played at as kids. That just happened to be how it worked out for me.

Kim Caramele is an American producer, actress, and writer. She is best known for appearing in the show ‘Inside Amy Schumer’.

Her father‘s name is Gordon David Schumer, and her mother‘s name is Sandra Jones. Gordon owned a baby-furniture company. Her parents got divorced when she was young.

She has an elder sister named Amy Schumer, who is a renowned comedian. Kim also has a half-brother named Jason Stein, who is a musician. She belongs to Ashkenazi-Jewish descent.

She went to South Slide High School. Kim graduated with a Bachelor’s degree in psychology from Pace University. Later, she received MSED from Queens College, the City University of New York in 2010.

Earlier, she used to work as a school psychologist from 2010-2013. After working as a psychologist for 4 years, she began her acting career with her sister’s show Inside Amy Schumer. Kim also wrote for this show.

She worked there from 2013-2016 as an actress. Afterward, Kim started working as a writer and producer for most of her sister’s shows. She has produced eight shows for her sister Amy.

Caramele made her appearances on various movies like Snatched, Barbie, and Expecting Amy. For her marvelous work on ‘Inside Amy Schumer’, Kim won the Writers Guild of Emmy Award for Outstanding Variety Sketch Series in 2015.

She was also nominated for the Primetime Creative Arts Emmy Award for Outstanding Writing For a Variety Series.

The average salary of a producer in the US is $68,000. Meanwhile, according to some sources, Kim has an estimated net worth of $1 million as of 2022.

There is no scandal and rumor about this producer. Meanwhile, she has managed to keep herself out of any controversy and rumor. She is doing great in her career.

American Comedienne Amy Schumer’s surprise to her fans-Her appearance on Judge Judy’s show! And her experience with food poisoning in Paris!