Who is the current wife of Kim Dotcom?

The duo got married on 20 January 2018 in a private location to mark the anniversary of the raid in which Dotcom was arrested.

In 2012 the raid took place by the FB, who initiated to shut down his file-sharing business Megaupload.

They started seeing each other in 2017. Dotcom is about 22 years older than his present wife, Donelly.
Past Relationships
Talking about the past relationship, previously he was married to, Mona Dotcom (Mona Verga) on 10 July 2009.
Together they are parents to five children named, Keera Dotcom, Kobi Dotcom, Kimmo Dotcom, Kaylo Dotcom, and Kylee Dotcom.
Dotcom announced his separation from his wife, Mona, via Twitter on 17 May 2014. 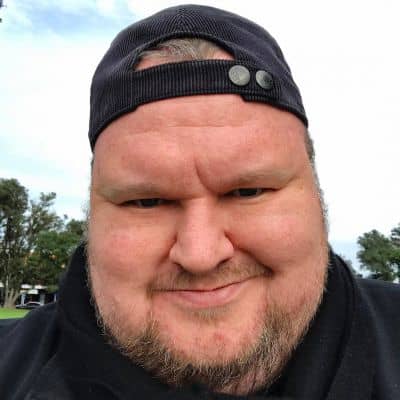 Who is Kim Dotcom?

In 1994 he was convicted on charges of copyright infringement, wire fraud, racketeering, and money laundering.

Dotcom is 48 years old as of 2022 and holds German nationality.

He is of mixed (Finnish and German) ethnicity and Aquarius is his birth zodiac sign according to the astrological chart.

Kim Schmitz is his full name while he is also known as ‘ Kimble’ or ‘Kim Tim Jim Vestor.’

His mother was Finnish while his father was German.

He was a troubled kid from a young age and started hacking then.

There is no info further info disclosing the parents, siblings, and educational life of Kim Dotcom.

Dotcom declared to the German media that he had hacked the security systems of ‘Citibank,’ ‘NASA,’ and ‘Pentagon in 1992.

He also even claimed that he is the hacker of several private branch exchange (PBX) systems of US-based companies previously.

In 2000, he founded a security company named, ‘Data Protect’ after which he made a security contract with ‘Lufthansa’ and invested the money into ‘Mega car’ which retailed around $90,000 including a multi-camera video conferencing system and display screen.

Dotcom shifted to New Zealand along with his family and bought 12 cars worth $3.2 million in 2009.

He hired a mansion and a helicopter. In 2010, he got permanent residency from the government of New Zealand and invested $10 million in the island nation.

Several indictments against Dotcom were filed in the United States on January 5, 2012. FPI team combining 76 police officers raided Dotcom’s house and net worth of $17 million.

He was rushed to ‘Mt Eden Prison for further investigation.

On March 27, 2014, he started a political party called, ‘The Internet Party.’ But, he was not eligible to contest the polls due to his citizenship status.

They had a collaboration with ‘Man Party’ which ended later on.

The party appointed Suzie Dawson as its new leader after remaining leaderless until February 2017.

The party contested in the 2017 general election but was not able to get any seats in the ‘House of Representatives.’

The Court of Appeal re-held previously made decisions and announced that Dotcom could be extradited to stand trial in the United States on July 5, 2018.

Afterward, Dotcom’s lawyer revealed that he would make an appeal to the Supreme Court.

Dotcom founded a group called ‘Young Intelligent Hackers Against Terrorism’ after the September 11 terrorist attack in the US.

He was offered a $10 million reward for information pertaining to Osama’s location after hacking Osama Bin Laden’s Sudanese bank accounts.

As a musician, he recorded his debut album, ‘Good Times’ at ‘Roundhead Studios in Auckland. On January 20, 2014, released his label, ‘Kimpire Music’ ranked at number eight on the New Zealand Albums Chart.

Similarly, he has appeared in the TV series documentaries and short videos like ’60 Minutes’, ‘Party Electricity’, Kim Dotcom on the Ring’, and ‘Click.’

Kim Dotcom decided to launch his own cryptocurrency but was not allowed due to regulatory uncertainty in November 2019.

He shared the news that he has the idea to bring billions of users to cryptocurrency in January 2020.

Kim Dotcom said to Elon Musk that the Bitcoin fees are very high and rather he prefers Bitcoin Cash because of its lowers fees in March 2021.

Then, Kim Dotcom commented, ‘Come and hang out in New Zealand for a bit. I’ll mentor you on how to navigate the upcoming attempts by the Democrats to punish you.

Best to be prepared.’

Kim Dotcom is living a luxurious life as an entrepreneur.

In addition, he has an estimated net worth of around 200 million USD as of 2022.

Dotcom has not shared his yearly/monthly earnings and incomes.

Kim Dotcom has always been in the rumors and controversies due to his illegal acts.

For operating a bulletin board system named ‘House of Coolness’ he traded pirated software and was arrested in March 1994 for selling stolen phone numbers.

In the same year, he was again arrested on hacking charges and sentenced to 11 counts of computer fraud as well as 10 counts of data espionage.

To avoid further investigation, he went to Thailand but he got arrested after the appeal from the German embassy.

In November 2003, he was taken back to Germany and was kept in jail for five months.

After detouring a prison sentence for a second time, he fled to Hong Kong from Germany in late 2003.

His body statistics are unavailable. Moreover, with a fair complexion, he has a couple of black eyes and brown hair.

Hacker, Kim Dotcom is available on Instagram under the username, @kim_dotcom which has around 64.6K followers while his  Twitter account is enriched with over 798K followers.

Additionally, there is an official Facebook page under her name, that has garnered more than 25K followers.

Find Out About, Alexis Kerry, Alexis Ohanian, and Dustin Moskovitz.