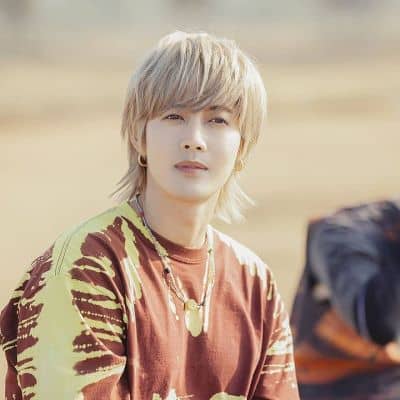 Talking about his relationship details, Kim Hyun Joong is presently single and he is not dating anyone at the moment. He seems to be busy with his career and professional life.

Previously, he was dating Ms. Choi with whom he was surrounded by a lot of controversies. Similarly, Kim was linked to South Korean actress and model, Jung So-min but separated in a short time.

Who is Kim Hyun Joong?

Kim Hyun Joong is a well-recognized Korean actor, dancer, model, singer, and songwriter. Joong is widely famed for being a member of the boy band SS501 and has performed roles in the Korean dramas Boys Over Flowers and Playful Kiss.

Moreover, he is known as one of South Korea’s biggest Hallyu stars of the early 2010s.

Kim Hyun Joong was born on 6 June 1986. At present, he is 35 years young star. Likewise, his birthplace is Seoul, South Korea.

Kim is the son of his father, Kim Hong Seong whereas his mother is Jeong Yeon-mi. Moreover, he has a brother named Kim Young Joong.

Talking about his nationality, Joong holds a South Korean identity whereas his ethnicity is Asian.

Regarding education, the actor completed his high school and studied at Kyonggi University. Later, he studied at Chungwoon University in 2011 to pursue stage production management studies.

Kim debuted in the music industry with his band, SS501 in their first album, Warning in June 2005. Later, they released their first studio album ‘S.T 01 Now’. Furthermore, Kim and his band members decided to increase their music outside Korea and they preferred Japan for this.

The band released their first Japanese single, Kokoro. Very soon, they launched their brand in Japan via another single, Distance in 2007. Next year, the star portrayed the lead role in the television drama, Boys Over Flowers. Likewise, they published their singles, All My Love, Solo Collection, Rebirth, and Destination in between 2009 and 2010.

Moreover, Joong featured in the role in Playful Kiss, a Korean adaptation of a famous Chinese drama. He also released his first solo mini-album on 7 June 2011 titled Break Down. Later, he released his second album, Lucky.

Freshly, it was announced that Kim Hyun-Joong has decided not to renew his contract with keyEast on 14 April 2020. Also, he held his first online concert, A Bell of Blessing on 17 October 2020, and later he released his second full Korean album named A Bell of Blessing.

A famed Korean star, Joong has earned a handsome amount of money from his profession. He has been active in his profession from the year 2005 till the present.

It is reported that Kim Hyun Joong has an estimated net worth of $5 million.

However, the singer has not disclosed his exact salary, earnings, and assets details till now.

Kim has been surrounded by multiple controversies and different lawsuits. In August 2014, Kim’s girlfriend, Choi filed a charge against him for repeatedly beating her and causing bruises and broken ribs. However, Joong denied the charges mentioning saying he had injured Choi only once and that it was an accident while practicing martial arts.

Earlier, Kim’s ex-girlfriend, Choi filed a lawsuit against him for 1.48 million USD for mental distress caused by her relationship with him and claimed that his abuse had caused her to miscarry a previous pregnancy in 2014. However, her lawsuit was dismissed and she appealed the decision.

35 years young star, Kim has handsome looks and an admirable personality. He stands at a height of 5feet 11inches. Also, he has a balanced body weight of 66 kg.

Furthermore, Joong has brown eyes whereas his hair is blonde.

Regarding his social media presence, Kim Hyun Joong is an active personality on social media. Kim has more than 1.9 million followers on his official Instagram account @hyunjoong860606.

Moreover, Joong is also available on Facebook with nearly 5.9 million fans and supporters.