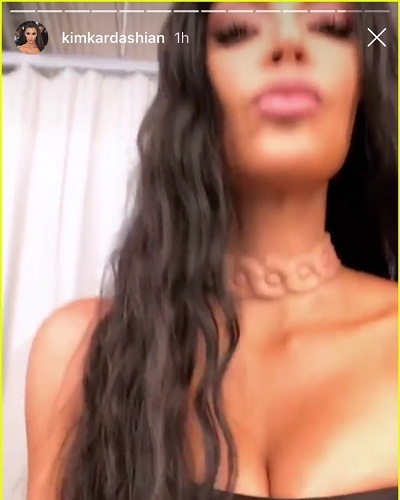 Kim Kardashian is one such celebrity who has been shocking fans with her unique fashion styles. The latest is a necklace that appears to be immersed into her skin and which glows with her heartbeats.

Kim Kardashian revealed on her social media a new necklace that is the same color as her skin and appears to be built into it. It glows yellow with her heartbeat. Kim has uploaded a video on her Instagram story, in which she has shown and explained this unique necklace.

“My necklace glows like a heartbeat. It moves to the rhythm of my heartbeat. Thank you A. Human.”

It has been revealed that this particular unique piece has been created by the fashion line which belongs to her long-time friend named Simon Huck. This fashion line features body modifications instead of clothes.

This fashion line termed A. Human is going to do the first exhibition of its collection during the upcoming September’s New York Fashion Week and it will be followed by an interactive session.

The reactions of Kim’s fans

Kim’s fans and followers were not too impressed by this new thing. They were, in fact, worried. One of them wrote:

“Ewwww this gives me anxiety.”

Another of Kim’s fans commented:

Another follower was extremely candid and explicit and said:

“That is the most disgusting thing ever”.

Kim and their show’s new season

The Kim sisters with their mom are ready and geared up for a new season of Keeping Up with the Kardashians show.

There has been plenty of drama and goings-on in their life this time and these would soon be seen on camera on the show. There will also be Scott Disick on the show this season.

Wonder if Sofia Richie would also make an appearance. We will have to wait and watch. The show which started in2007 has brought great fame to the household and along with it came wealth.

It is an experiential concept created by Simon Huck and it talks of being able to change your body as easily as you change your clothes.

“We didn’t want to root any of our modifications on the idea of existing insecurities or discomforts,”

“A. Human is about the freedom to explore this world and live in this world in any way you choose.”

Besides this choker, the other concepts are a permanent heel for your feet and DNA-mirrored hearts. He said: