Kim Matula, a hot and sizzling actress is believed to be dating actor Ben Goldberg since 2012.

She has been successful in keeping her private life hidden by not providing any hints to spell the bean.

Talking about the past relationships of Kim Matula, she was involved in the onscreen romance with Scott Clifton, Darin Brooks, and Ashleigh Brewer but, there is no complete information about their hookup and breakup dates and the nature of the relationship.

Thus, the young and talented ‘The Bold and Beautiful’ star is not in any confirmed relationship and it is believed that she is very conscious of her love life and its privacy policy. 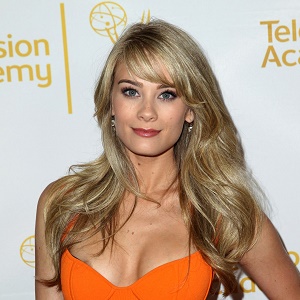 I had actually tested first with 'Young and Restless' for the role of Daisy. It came down to three of us, but I didn't book that job. A couple of weeks later, I was told that I had an audition for 'B&

B.' I did two auditions, and they booked me. It was a short process, which I greatly appreciated

I've always been worried about being late for things, so I'm 30 - 40 minutes early for everything. That's a habit I'll keep going

I have a pretty good sense of direction. And if I get lost, I just act like I know where I'm going.

Who is Kim Matula?

Kim Matula is an American actress who is eminent worldwide for her role in the CBS daytime soap opera ‘The Bold and the Beautiful’ as ‘Hope Logan’ and is currently playing the role of Tiffany in season 2 of the comedy-drama series ‘UnReal’. She once announced that she is leaving the Television series field to make her career concentrated in the Film Industry.

Born to David and Karin Matula in Fort Worth, Texas, United States of America on 23 August 1988. Her nationality is American and her ethnicity is mixed(Norwegian, Czech, English, German).

Kim Matula’s mother’s name is Karin Matula and father’s name is David Matula. She is an American actress who was raised by her parents having Norwegian descent. She has a sister named Katherine Matula.

Kim was a passionate child who was interested in acting and video making.

So, to make her passion a profession, she attended the University of Texas at Arlington whereby, she majored in ‘Film’.

She started to make a career in acting when she was at the University of Texas at Arlington but, due to her busy schedule, she was forced to leave her studies in the middle of her 4-years program and get herself involved in some acting relevant field.

Therefore, Kim Matula was a very talented child with a dream of being a successful actor in the coming future.

Kim Matula started her career when she first made her debut in the film ‘Savage Spirit’ in 2006 which she played the role of Megan, which was followed by her work as Tara in the Lifetime movie ‘Queen Sized’.

She got her breakthrough when she got the opportunity to play the role of ‘Hope Logan in the CBS daytime soap opera ‘The Bold and the Beautiful and was nominated for ‘Daytime Emmy Award for Outstanding Younger Actress in a Drama Series.

This was a life-changing opportunity for Matula. Currently, she is busy with the second season of the critically acclaimed Lifetime dark comedy-drama series, ‘UnReal’ in which she is portraying the role of Tiffany.

As of 2022, Kim’s net worth is estimated to be around $6 million and her salary is unknown.

Recently, there was a burning rumor that Kim Matula is dating Ben Goldberg because of her closeness with him. This news is still believed to be true concerning Matula’s Social media.

This news is yet to be confirmed by Matula and Goldberg in the coming days. Previously, Kim Matula was often rumored to be pregnant but, every time this news gets denied by Matula in her interviews.