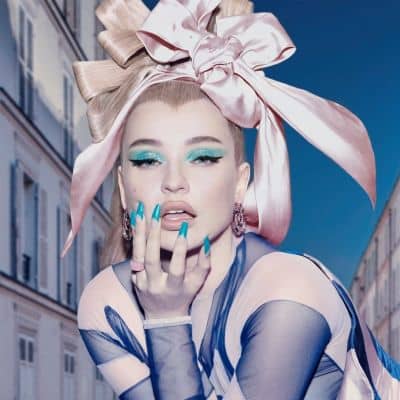 Talking about her love life, Kim Petras is single and she is not dating anyone at the moment. She has stated she always felt like a woman before the gender transition and will always be a woman.

The singer actively participates in many programs where she constantly speaks about the transgender issue. She has spoken openly for the LGBTQ community as Kim mentions it’s her home.

Petras seems to enjoy her personal and private life and does not want to share her things with the public and media.

Who is Kim Petras?

Kim Petras is a well-recognized German singer and songwriter. Petras released her debut single in 2017 titled, I Don’t Want It at All which peaked top several viral music charts on Spotify.

Moreover, she released others Billboard-charting singles, Feeling of Falling, Heart to Break, and 1,2,3 Dayz Up(featuring Sophie).

Kim Petras was born on 27 August 1992. At present, her age is 29 years old. Likewise, her birthplace is Cologne, North Rhine-Westphalia, Germany.

Kim is the daughter of her father, Lutz Petras whereas her mother is  Konni Petras. Moreover, she has an older sister with whom she spends her childhood.

Talking about her nationality, Petras holds a German identity whereas her ethnicity is German.

Regarding education, the star personality has not revealed her academic background to the public. She might have completed her education at the university of the town.

Kim started her musical journey by releasing a string of singles under Joyce Records titled, Fade Away, Last Forever, Die For You, and Boomerang.

Likewise, she also featured on two singles titled, Flight to Paris and Heartbeat. By the end of July 2013, the singer was ranked at number 19 on Billboard’s Artist Chart listing developing artists.

Petras in advance published her debut single, I Don’t Want It at All in August 2017. It went to reach the Spotify Global Viral chart.

In the same month, she got selected by Spotify to be one of the four artists named as a RISE artist. Additionally, Kim released Turn Off the Light, Vol. 1, a Halloween-themed extended play on 1 October 2018.

She also announced to release a single a month as a lead-up to her debut album. Freshly on 6 November 2020, Kim emerged on K/DA’s EP All Out featuring the song “Villian” alongside Madison Beer. She also featured on different songs made popular on TikTok which includes “Jenny” with Studio Killers and SugarCrash.

Moreover, her 2017 song titled, Unlock It with Charli XCX and Jay Park went viral on TikTok.  The singer has also mentioned her Turn Off the Light, Vol. 3 will be released sometime in 2021.

A Famed Los Angeles-based German singer, Petras has earned a handsome amount of money from her profession. She has been active in his profession from the year 2008 till the present.

It is reported that Kim Petras has an estimated net worth of $4 million.

Well, Kim mentioned she was assigned male at birth, her parents stated that from the age of two, Petras knew she was a girl. Later in 2006, the singer at an age 12 featured on a German television current affairs show where she openly discussed her medical gender transition.

In detail, Kim featured in a documentary and a talk show at age 14 in a push to get permission for early gender confirmation surgery at age 16. It made international headlines as she became the world’s youngest transsexual.

Kim in September 2007 was a model for a German chain of hair salons. She was examined by the head of the psychiatric unit at Frankfurt Hospital, Dr. Bernd Meyenburg. She declared in November 2008 that her surgery was completed. Her story was covered by many news outlets like The Sun, BBC, The Telegraph, and The Metro.

29 years old star, Kim has gorgeous looks, hot shapes, and an admirable personality. She stands at a height of 5feet 6inches. Also, she has a balanced body weight of 56kg.

Furthermore, Petras has blue eyes whereas her hair is blonde.

Nevertheless, the juvenile singer has never mentioned other physical details in the public yet.

Regarding her social media presence, Kim Petras is an active personality on social media. Kim has more than 607k followers on her official Instagram account @kimpetras.

Moreover, Petras is also available on Facebook with nearly 129k fans and supporters. She has more than 73.5k followers on her official TikTok account.