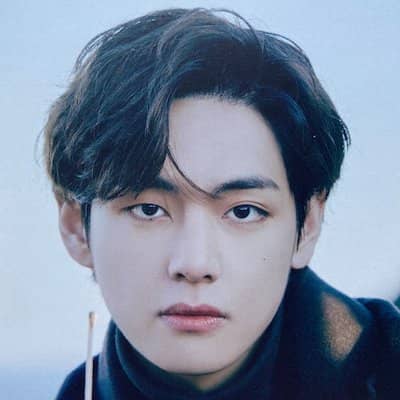 Kim Taehyung’s relationship status at present is possibly single. He has not revealed the details of his affair or girlfriend yet.

Who is Kim Taehyung?

Kim Taehyung aka V is a popular South Korean singer and actor. He is popular for his acts with a South Korean boy group BTS.

In addition, he is also popular in the digital world where he has millions of followers.

His birthdate is 30 Dec 1995 and he was born in Seo District, Daegu, South Korea. The information of his mother with his father is not disclosed.

Regarding his academics, he attended the Korean Arts High School and then the Global Cyber University.

Kim Taehyung is a popular face of the entertainment world. He is associated with an eminent music group BTS. He joined them in June 2013 and has been one of the vital parts of their projects.

As a writer, he has written for several albums. Some of the tracks are Run, Stigma, Run, Winter Bear, Inner Child, Sweet Night, In The Soop, Snow Flower, and more.

Furthermore, Kim is an actor who was seen as Seok Han-sung in the TV series Hwarang: The Poet Warrior Youth. He also co-hosted shows like Show! Music Core in 2014, Music Bank in 2015, and Inkigayo in 2016.

By the recorded reports of 2021, he has accumulated a net worth of around $1 million US. The salary from his amazing career is behind the curtain.

This BTS famed singer is keeping himself away from rumors and desperate scandals.

Kim Taehyung’s height is 5 ft 10.5 inches and his body weight is 70 kg. Moreover, he has dark brown eyes and his hair is in dark brown color.