Kim Yo Jong is a North Korean politician. She is married. 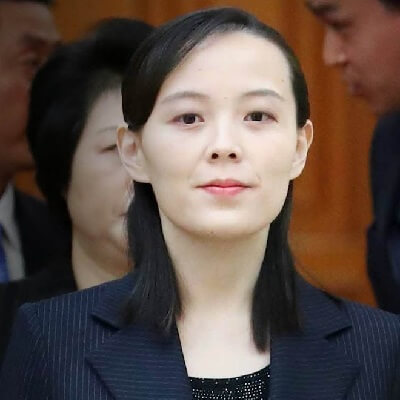 Quick Facts of Kim Yo Jong

It is our consistent stand to be committed to denuclearization on the peninsula, in accordance with the will of late President Kim Il Sung and late General Secretary Kim Jong Il.

Honestly, I didn’t know I would come here so suddenly. I thought things would be strange and very different, but I found a lot of things being similar, here’s to hoping that we could see the pleasant people (of the South) again in Pyeongchang and bring closer the future where we are one again.

Relationship Facts of Kim Yo Jong

Kim Yo Jong is married. She is married to Choe Song.

Song is the son of one of the most powerful officials in North Korea, Choe Ryong-Hae.

The couple reportedly wed in January 2015. Allegedly, they have two children together, one born in 2015 and the other in 2018.

Not much is known about Choe Song but his father, Chor Ryong-Hae is seen as the “number 2” of the North Korean leader and is undoubtedly one of the most powerful officials in North Korea.

Who is Kim Yo Jong?

Kim Yo Jong is a North Korean politician.

Currently, she is serving as the First Deputy Director of the Workers’ Party of Korea. She is the sister of the Supreme Leader of Korea, Kim Jong-un, and is seen as one of the potential successors.

She was born to parents Kim Jong-il (father) and Ko Yong-hui (mother). Her father, Kim Jong-il was the second Supreme Leader of North Korea.

She and her brother, Kim Jong-un, are believed to have a close relationship as they spent several years isolated in Switzerland together.

She is the youngest of her father’s five known children. Her elder siblings are Kim Jong-Nam, Kim Jong-Chul, Kim Jong-un, and Kim Sul-song.

Kim Jong-un is the third and current Supreme Leader of North Korea.

Her ethnicity is North Korean.

In 1996, Kim moved to Switzerland to obtain an education.

She attended Liebefeld Hessgut public school. After that, she enrolled at Liebefeld Steinhölzli public school where she was joined by her brother, Kim Jong-un.

The two of them enrolled in the schools under pseudonyms. The siblings spent the years 1996-2000 together in Switzerland together which is believed to be the reason they are close to each other.

She later returned to North Korea and in 2007, she graduated from Pyongyang’s Kim Il-sung University with a computer science degree.

In 2007, Kim Yo Jong was appointed a junior cadre to the Workers Party of Korea.

She handled the role of her father’s secretariat until his death in late 2011.

She replaced her aunt, Kim Kyong-hui as one of the female leaders of the WPK after the execution of her husband in late 2013.

In late 2014, she became acting director of the National Defense Commission and was also got appointed to the Propaganda and Agitation Department.

Three years later, she became an alternate member of the party’s political bureau.

In 2018, she visited South Korea as the highest-ranking official of North Korea since 1953 in the Winter Olympics as her brother’s envoy. She had a meeting with South Korean President Moon.

In the 2019 Killimgil district parliamentary election, she was voted to the Supreme People’s Assembly as a representative.

The same year, in March, she released her first public statement in defense of their policy and criticized South Korea for their complaints about her nation’s military policies.

Kim Yo Jong and her brother went to summits with the US president regarding denuclearization twice, once in Singapore in June 2018 and the second time in Hanoi, Vietnam, in February 2019.

Reportedly, the Supreme leader blamed his sister and removed her from the politburo, before reinstating her again in April 2020.

Is she the successor of her brother?

In 2020, after the rumors of her brother Kim Jong-un’s possible demise, the world media has seen her as the successor to her brother.

Although some are saying a woman ruler would not be accepted in the nation, the majority are seeing her chance as the successor as over 90% because his heirs are too young to rule.

Kim Yo Jong: Net Worth, Salary

Kim’s net worth remains under the shadow as of now.

There is no information about her net worth as it has been kept private like many other things in North Korea.

Her brother, Kim Jong-un has an estimated net worth of at least $5 billion.

She stands at a height of around 5 feet 4 inches and weighs around 51 kg. She has not revealed anything about her body measurements.

The whole nation of North Korea is controversial with people deprived of their rights, nuclear weapons, conflicts with other countries, and has been declared a threat to world peace.

For her leadership role in the Propaganda and Agitation Department, she was among the seven people of North Korea sanctioned by the U.S. Treasury in 2017 for “serious human rights abuses and censorship activities.”

Moreover, according to the rumors, she is also involved with the controversial Office 39, tasked with raising funds for the Supreme Leader through various illegal activities.

Jong is not active on social media for obvious reasons.

They are very private and internet access is available but strictly limited in the country with permissions given only for government purposes and to foreigners.

You may also like to read about the Bio, Career, Net Worth, Relationships, and more about Rudy Guiliani, Andrew Cuomo, Kerry Kennedy, and more.

American Former Basket Ball Player, Dennis Rodman, says Kim Jong Un Does Not Want to Bomb Anyone, And Is a Everyday Man