Kimbella Vanderhee is a married woman. She has been married to Juelz Santana since January 10, 2019.

The couple started dating since 2009 but they had several trust issues in their relationship as Kimbella was accused of cheating on Juelz with American rapper Fabolous and also he was accused of sleeping with other women.

However, they gave each other several chances and Julez even bought her a house in 2015.

Juelz got on his knee on November 25, 2018, and Kimbella did not waste a moment to flaunt the diamond ring from Avianne jewelers.

After the engagement, Juelz was sentenced to 27 months in prison, and also after completing his sentence, he has to be under 12 months of supervision.

He was discovered a loaded handgun and eight oxycodone pills by Newark International Airpot’s TSA and the custom found the illegal items during the standard X-Ray screening. However, he is now released.

The couple exchanged vows in a small and private ceremony in New York where their close friends and family attended. The couple has welcomed two children, Bella Monroe James, and Juelz Santana James.

Currently, the family is living together and they are spending quality time with each other. 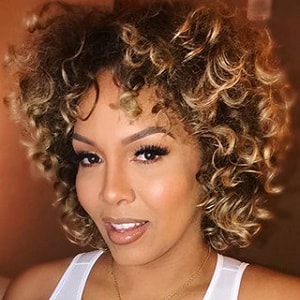 She was born on October 13, 1983, in Miami, Florida. She has got a nickname, Kim. Kim’s father was abusive and her mother was mostly the victim.

Kimbella’s father is African-American and her mother is a Caucasian. She has got a sister named Lil Kim and she is also involved in the entertainment industry.

Kimbella holds American citizenship and her ethnicity is a mix of Caucasian and African-American.

Talking about Kim’s education, she has a master’s degree and she has spent many years in the pharmacy industry.

Kimbella Vanderhee came from a tough background, so keeping her step in the field of acting and modeling was a huge accomplishment for her.

She began modeling in the city of Miami in 2003 and got her first role as a dancer on the series ‘The Roof’ in 2004 in which she played as herself, not the fictional character. Due to her striking beauty, she got the opportunity to appear in the cover of Black Men’s magazines and some other publications.

She got her another breakthrough from the second season of the American reality show ‘Love & HipHop: New York’ on VH1 in 2001. She is still portraying the role in the series and is cast as the main member of the series since season 7.

Vanderhee has an estimated net worth of around $800k as of 2022, and she has earned that from her professional career. However, she has not revealed her income and salary.

She was involved in a physical fight with Erica Mena and Chrissy Lampkin, who were the cast of the series ‘Love & Hip Hop: New York’.

The reason behind the fighting was a possible affair between Kim and the ex-boyfriend of Erica. The situation has brought some negative image of Kim but she has tried to put is past her so that she could move forward on her career.

Kimbella Vanderhee has a height of 5 ft. 5 inches and weighs  61 kg. Kimbella has light brown eyes and dyed her hair blonde. Her body measurement is 34-27-38 inches.

Also, she has gone through several plastic surgeries from head to toe. She has transferred some fat from her love handles to her backside and also has got her breast inflated.

Some people believe that she has got her nose done too but it is still unknown. She seems to be very happy with her new body.

To know more about Kaki Hunter, Chloe Rose, and Chloe Bennet, please click on the link.