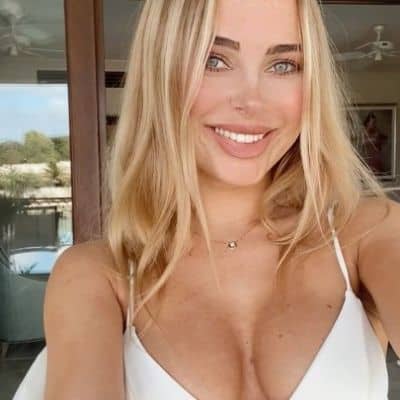 Talking about her love life of Kimberley Garner, she is possibly single and is not dating anyone at the moment.

However, she has been suspected of dating James Arthur in the year 2012. The couple was spotted on a dinner date in December 2012 by the paparazzi. Arthur is a well-named English singer and songwriter who came into the limelight after winning the ninth series of The X Factor in 2012.

Further, she also suspected of dating Richard Dinan in the same year. Dinan is a well-named British businessperson. Having said this, both of them never confirmed the relationship.

Apart from this, Kimberley is a dog-loving person. She also has a dog, Sascha, and fights for animal rights.

Who is Kimberley Garner?

Kimberley Garner is a well-recognized British swimwear designer, television personality, and socialite. Garner is widely famed for her role in the series, Made in Chelsea and The Write Stuff series.

Moreover, she founded her own swimwear collections in May 2013 and is the director of Kimberly London and Young London Events Ltd.

Kimberley Garner was born on 10 February 1991. At present, her age is 30 years old. Likewise, her birthplace is Kensington, London, England, UK.

Kimberley is the daughter of her father, Russell Garner whereas her mother is Geraldine Garner. Moreover, she has a brother named Christopher Garner and a sister, Countess Faye de Pelet. Her dad is a prosperous real estate developer.

Talking about her nationality, Garner holds a British identity whereas her ethnicity is Caucasian.

Regarding education, the designer completed her high school at St. George’s School, Ascot. She also took courses in politics, photography, art, and religion.

A well-known personality, Kimberly models for her own designs. For her acting career, Kimberley studied acting in three different acting schools. She became the regular casting member of the BAFTA award-winning show, Made in Chelsea. Garner was part of the television show in March 2012.

However, the actress left the show after eight months in November of the same year. Moreover, she also performed the role of the female lead in the Hollywood movie, Sweetheart which was her debut role in the movie industry.

Kimberly is also an entrepreneur. She launched her collections in May 2013. Further, she also created a new company to sell her collections; Kimberly London Ltd. Garner is also the director of another London-based company, Young London Events Ltd.

Talented personality, Garner has earned a massive amount of money from her profession and lives a luxurious lifestyle. She has been actively working in her profession from 2012 till the present.

It is reported that Kimberley Garner has an estimated net worth of $46 million. Similarly, she bought a mansion in the year 2013 which worth £1.275 million.

Other than that, she has not disclosed her exact salary, earnings, and assets details till now.

Kimberley had encountered an incident once. She was in a bikini washing a shell on the beach. All of sudden, a wave of water came and her bikini bottom fell down. At that time, she was shooting photographs by paparazzi, who was hiding behind the tree. Fortunately, she was protected by the shell.

Other than that, she has not been in any controversy or rumors.

It seems that Garner prefers enjoying her personal life and does not want to merge it with her professional life.

30 years old actress and designer, Kimberley Garner is mostly admired for her hot figure, charming looks, and admirable personality. She stands at a height of 5 feet 9 inches. Also, she has a balanced bodyweight of 53 kg.

Furthermore, Garner has green eyes whereas her hair is blonde.

Additionally, Kimberley wears a shoe size of 8 (US).

Regarding her social media presence, Kimberley Garner is an active personality on social media. Kimberley has more than 483k followers on her official Instagram account @kimberleygarner.

She is also active on Twitter with around 55.3k followers.

Moreover, Garner is also available on Facebook with nearly 3.3k fans and supporters.