Who is Kimberley Walsh's husband?

Kimberley Walsh is married to her long-term partner Justin Scott, a former member of the British boy band Triple 8, on 30 January 2016.

The couple is leading a happy conjugal life ever since with their three sons Bobby, Cole, and Nate. 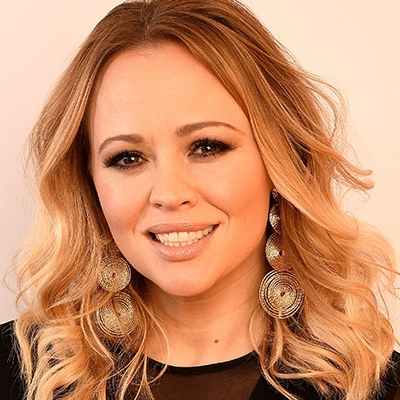 Who is Kimberley Walsh?

Kimberley Walsh is an English singer, television presenter, actress, and dancer who is one of the five of the band Girl Aloud. She was ranked 37 in the FHM’s annual list of “100 Sexiest Woman in the World” in 2009.

Recently, Kimberley worked as the presenter of BBC Morning and had risen to prominence in 2002 after appearing in the reality series Popstars: The Rivals on ITV.

Kimberley Walsh was born on 20 November 1981 in Bradford, West Yorkshire to father John and mother Diane Walsh. The 40-year-old singer, actress resembles the Caucasian ethnicity and has a Scorpio zodiac.

Growing up, she spends her time with three siblings, Sally Walsh, Amy Walsh, and Adam Walsh in Allerton, West Yorkshire.

What does Kimberly Walsh’s sister do?

Sister Sally is an actress who portrayed Lyn Hutchinson on the soap opera Emmerdale between 1997 and 2000. On the other hand, sister Amy joined the show’s cast in 2014 as Tracy Shankley.

Kimberley Walsh joined Sandy Lane Primary School in order to pursue primary education. Her inspiration to become an actress started after gaining fame as a child artist advert alongside sister Sally in Adsa advert. Thus, she learned acting from the Bradford theatre school and Stage 84.

The early career of Kimberley Walsh began the moment she starred as Young Cosette in a regional production of Les Misérables. Later, she starred in ITV’s The Book Tower in 1986.

Regarding singing, she first started singing as a member of the girl group Girls Aloud right after the 2002 reality series Popstars: The Rivals on ITV.

The 2009 band single of hers, The Promise won her Best Single Award. Similarly, six of her studio albums got platinum certification by the British Phonographic Industry,  two got her first rankings in the UK and five BRIT Award nominations.

Likewise, her next studio album Central Stage was released on 4th February 2013. She featured as a lead artist in the 2011 single Everybody Dance and the 2013 single One Day I’ll Fly Away.

By singing electric pop and experimenting with dance-pop, Kimberley Walsh has around $10 million net worth. However, her exact salary is unavailable to the sources.

Through the band Girl Aloud, Kimberly along with her team earned a fortune of $39 million USD by May 2010, in the span of 8 years.

Kimberly stands tall with a height of 5 feet and 5 inches and weighs around 60 kg. She flaunts her brown wavy hair and hazel eyes in her fair round face.

Besides this, the wiki of her chest-waist-hip measurement, dress size, and shoe sizes are under update.

Kimberly is quite active on Instagram using the IG @kimberleywalshofficial where she has 768k following.

Her recent IG post features her son Bobby with a book in his hand on World’s book day. She then talks about how she asked her boy to find a boy wearing pajamas on the book cover if he really wanted to do the same that day.

She joined Twitter in 2010 where she now has a family of 615.2k followers. Also, Kimberly is active on her self-titled Facebook page with 86k followers.

Cheryl Tweedy has a new boyfriend and he is from the entertainment industry!