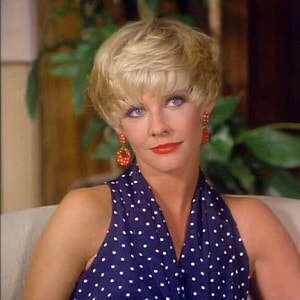 What is the relationship of Kimberly Foster?

Kimberly Foster is a married woman. She has been married to Laurence S. Zimmerman since 1994. The couple has welcomed two children.

The family is currently living in Sagaponack, NY and spending quality time with each other.

Who is Kimberly Foster?

Kimberly Foster is an American actress. She is popular for her role as Michelle Stevens in ‘Dallas’ and Cookie Cambell in the film ‘One Crazy Summer.

Her father’s name is Marion Gary Foster and her mother’s name is Paula (Atkins) Foster. She has a younger brother, Brett. Her childhood was spent in Booneville, Arkansas.

Kimberly holds American citizenship but her ethnicity is unknown.

In which school did Kimberly Foster attend?

Talking about her education, she graduated from Booneville High School and was a cheerleader. Later, she joined the University of Arkansas but dropped out in order to pursue her modeling and acting career.

Kimberly Foster debuted her film career as Susan in the TV Movie in ‘Making of a Male Model’ in 1983. In the same year, she debuted her television career from ‘The Yellow Rose’.

Furthermore, she portrayed the character Cookie Cambell in the film ‘One Crazy Summer’ in 1986, Girl Reading Book in ‘You Can’t Hurry Love’ in 1988, Jonni Tigersmith in ‘It Takes Two’ in 1988, Kendall Gordon in ‘Love Bites’ in 1993, etc.

It seems the actress hasn’t received any awards and nominations for her work to date.

What is Kimberly Foster’s net worth?

Regarding earnings, she has an estimated net worth of around $1.6 million as of 2022, from her professional career.

It seems Kimberly Foster has not been involved in any types of rumors and controversies in her career.

Other information regarding Kimberly’s height, weight, body measurement, etc. are not available.