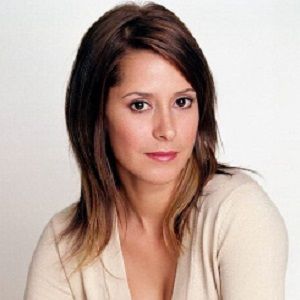 My favorite was with Grant Putnam. I did a really cool scene. In fact, it was really scary - he killed my grandmother [Filomena] right in front of me. That was pretty freaky.

[When asked who on her cast she'd take with her car shopping] I'd take Maurice Benard (Sonny), because he seems to scare people even though he's the sweetest man ever. He's kind of like a big brother to me. He could come in and act like a mobster and scare them into giving me a good buy.

(When asked about her relationship with co-star Jason Thompson) We did hit off right away. I don't normally become friends with people I work with. Not because I don't want to but just because I have always kept work and my personal life separate. But we have become friends. I'm not much of a skater so hockey is out of the question!

(When asked if the rings she wore had any significance) Yes, actually. They represent every long-term relationship I've ever been in. After each break-up, I bought myself a ring to remind myself of the good parts of the relationship and what I would like to improve in my next one...there are 3 so far...

What is the relationship of Kimberly McCullough?

On talking about her relationship, she previously dated her long-term boyfriend, Freddie Prinze Jr, before he met Sarah Michelle Gellar.

She, later on, had an affair with NASCAR superstar Dale Earnhardt Jr. from February 2006 to early 2009.

However, McCullough revealed that she had suffered the miscarriage of her daughter at 22-weeks in the year 2015. Later on, she again got pregnant with her second child and gave birth to her son, Otis on June 7, 2017.

Besides, the director is living a single life with her child with no signs of rumors.

Who is Kimberly McCullough?

Kimberly McCullough is a television director, actress, and dancer belonging to America. She is popular for her role in the soap opera General Hospital as Robin Scorpio.

He has got two younger brothers in her family. The information regarding her family is currently unavailable. However, her mother is a dance teacher and takes her to rehearsals, as well as makes her involved in acting.

She has learned various skills and activities like dancing, gymnastics, and so others during her childhood.

In discussing her educational background, in 1996-97, she joined NYU’s Tisch School for the Arts.

Previously, she performed in a diaper commercial, co-starring actress Juliet Mills as a 7-month-old baby. She then auditioned for choreographer Debbie Allen at the age of 6.

Moreover, she auditioned for the role of the 6-year-old daughter of Anna Devane (director/actress Finola Hughes) and Robert Scorpio (Tristan Rogers), Robin Scorpio,  after being failed to get a role on the TV sitcom Webster in 1985.

However, the producers provided her the part and the role in the TV show after she auditioned 12 times.

Furthermore, during the Asian Quarter storyline, she established her debut in the fall of 1985. However, she was able to get a short break from pe the character in 1996.

Besides, she came back to the show in 1998 but also left time by again to pursue other acting opportunities like appearing in the primetime drama series Joan of Arcadia and Once and Again.

Additionally, She also created and made the mockumentary entitled Lil Star regarding girls in child beauty pageants. She then performed as Amy in the movie “Legally Blonde” in 2001. In addition, she directed the short film entitled Nice Guys Finish Last in 2011.

In talking about her achievements and award, she won her first Daytime Emmy Award in 1989 at the age of 11 for “Outstanding Juvenile Female in a Drama Series”.

She also received a second Daytime Emmy in 1996.

Kimberly McCullough: Salary and the Net worth

The director is supposed to earn a high amount of salary but currently has not been available.

As of 2022, she has an estimated net worth of $4 Million that she earns from her successful career.

Yet, she has not gotten into and been part of any controversies. She can maintain both her personal and professional life.

So, there are currently no records available regarding her rumors and controversy.

In discussing her body measurement, she is 5 feet and 2 inches tall with unknown body mass.

An actress is active on Twitter with 123K followers and on IInstagramh 77.9K followers rather than on Facebook.