Kimberly Perry is a happily married woman. She tied the wedding knot with musician Johnny Costello.

In June 2021, the beautiful couple secretly married and have been keeping their married life private until December 2021.

Previously, Kimberly was married to J.P. Arencibia for almost 4 years. In February 2012, they first met at the Florida Strawberry Festival.

In the fall of 2013,  Arencibia proposed to Kimberly’s in her parent’s backyard. Afterward, they got married on 12th June 2014 at the First Presbyterian Church in Greeneville, Tennessee.

However, their marriage didn’t long last, and part ways in the year 2018. 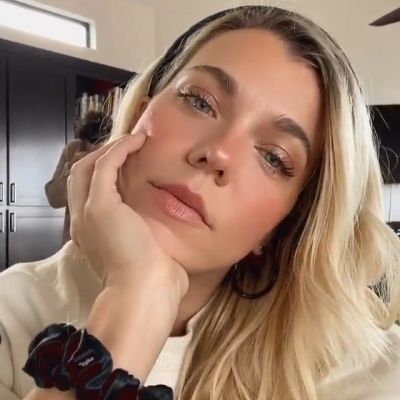 Who is Kimberly Perry?

Kimberly Perry is an American country singer and music personality. She is a lead singer ad the guitarist for the country group, The Band Perry.

The band’s single, “If I Die Young” was certified 6x multi-platinum. She is best known for her studio album, Pioneer.

Kimberly was born on the 12th of July 1983, in Jackson, Mississippi, United States. She hails from Greeneville, Tennessee. Her full name is Kimberly Marie Perry.

Her academic background is under the curtains. Further, she holds an American nationality whereas she belongs to Caucasian descent.

In 2005, Kimberly formed a band titled The Band Perry along with her brothers Neil and Reid. Eventually, Kimberly released an EP entitled “Carry On”. They also joined a New Faces of Country tour in the same year. They were discovered by Garth Brooks’s manager Bob Doyle in 2008.

In August 2009, they signed to Republic Nashville and released their debut single titled Hip to My Heart. The song was listed at No. 20 on the Billboard Hot Country chart. On October 12, 2010, they released their second single, “If I Die Young” written by Kimberly.

The album was produced by Nathan Chapman and Paul Worley. In December 2010, they released their third single, “You Lie” written by Brian Henningsen, Aaron Henningsen, and Clara Henningsen. The same year, the band won the Academy of Country Music Awards. On February 2, 2014, she performed in the pre-game show of Super Bowl XLVIII.

The band left Interscope Records/Mercury Nashville in mid-2018 to release music independently. Aside from music, Kimberly made her theatrical film debut in the drama movie, Redemption. Similarly, she made her first TV show appearance in the music TV series CMT Hot 20 Countdown in March 2011.

Kimberly two-times Grammy-nominated for Best New Artist in 2012 and Best Country Song in 2011. In 2015, he was awarded for Best Country Duo/Gropu Performance in Grammy Award.

As of now, she hasn’t been part of any sorts of rumors and controversial matters that could hamper her personal and professional life.

Kimberly is living a lavish lifestyle. As of 2021, she has an estimated net worth of around $10 million.

In 2019, she listed her California home, the five-bedroom, and five-bathroom houses for $3 million. Further, her salary and other earing are still under review.

The musician has a well-maintained body physique. She stands at the height of 5 feet 9 inches tall and her weight is about 62 kg.

She has a blue pair of eyes and dark brown hair color. However, he often dyes her hair in blonde color.

The musician has verified social media sites. She is active on Instagram under the username @thekimberlyperry where she has more than 111k followers.