Kimberly Schlapman is the vocalist of the band, Little Big Town. She is a cooking enthusiast also a host of a television program, Kimberly's Simply Southern. Kimberly is married with two children. 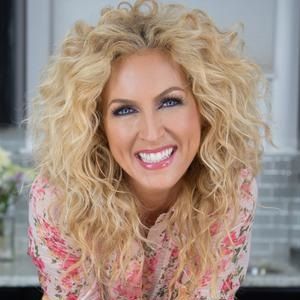 My hubby makes a mean salmon steak at the grill, but he leaves all the sides up to me. I love to grill and roast vegetables. I also experiment with baking instead of frying some things, like onion rings. I even make biscuits with coconut oil these days

My personal decorating style is cozy, romantic and a little rustic, with a sense of whimsy

As weird as it may seem, I enjoy doing laundry and watering my plants, very normal things like that.

What is the relationship of Kimberly Schlapman?

Moving towards the personal life of Kimberly Schlapman, she is a married woman. She tied the knot with Stephen Schlapman on 28th November 2006.

Earlier she also married Steven Roads. But unfortunately, he died on 6th April 2005. The couple didn’t have any children.

Who is Kimberly Schlapman?

Kimberly Schlapman is a singer as well as a chef. Her band named Little Big Town had won a Vocal group of the year at CMA awards in 2014.

Kimberly Schlapman was born on 15th October 1969 in the USA to Caucasian ancestry. There is no information about her parents. She has a sister named Paula James.

Besides this, she hasn’t mentioned any information about her childhood as well as her family.

She studied at Samford University in Alabama, as part of the school’s reputed Capella group.

Kimberly Schlapman started her experienced part of her life in 1999. This year she along with her band had signed their first major recording gig with Mercury records in 1999 but could not produce any single or albums during that time.

In 2002, they had eventually dropped by the label and signed on with Sony Music’s Monument Records. Then successfully they had released there the first album of which singles “Don’t Waste My Time,” and “Everything Changes,” climbed high on the music billboards.

She had also collaborated so far with other singing stalwarts like Alicia Keys and Taylor Swift. In 2012, she had also become a huge cooking chef and hosted on her own show titled ‘Kimberly’s Simply Southern’ at the Great American Country channel.

And she had published her first cookbook titled ‘OH GUSSIE! Cooking and Visiting in Kimberly’s Southern Kitchen’. Kimberly’s book was featured on various national TV shows like The Today’s Show and Dr. Oz.

Moving towards her awards and achievements, she had won many of the awards in her career life. She has won the best country group song for ‘Girl Crush as well as a Grammy back with their single ‘Pontoon’ in 2013.

How much is Kimberly Schlapman’s Net Worth, Salary?

Kimberly Schlapman is 5 feet 6 inches tall and weighs 54 kg. She has a pair of beautiful blue eyes and gorgeous blonde hair and her feet size is 9(US), as well dress size, is 4(US).